Just finished bringing this one back from the dead. It's had a total strip down, clean and oil. Currently keeping time within a minute per day, so I still want to try and adjust the regulator.

The second case serial number is mistruck, but I believe it's a '0'.

Watch has been fitted with a lovely gold spring band that has a patent date of Sept 24, 1918. 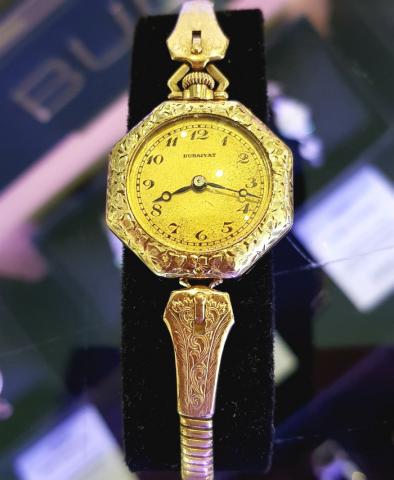 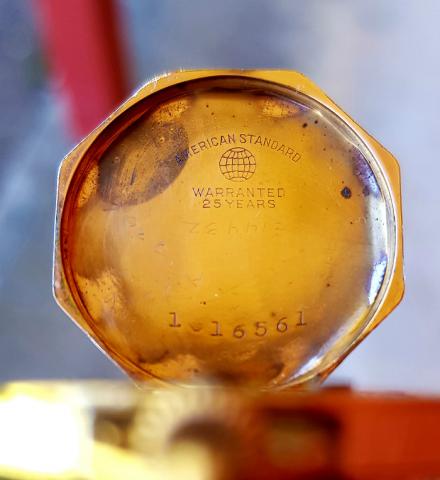 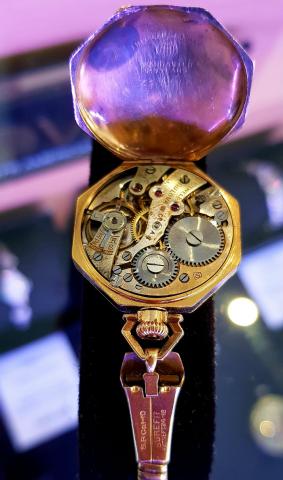 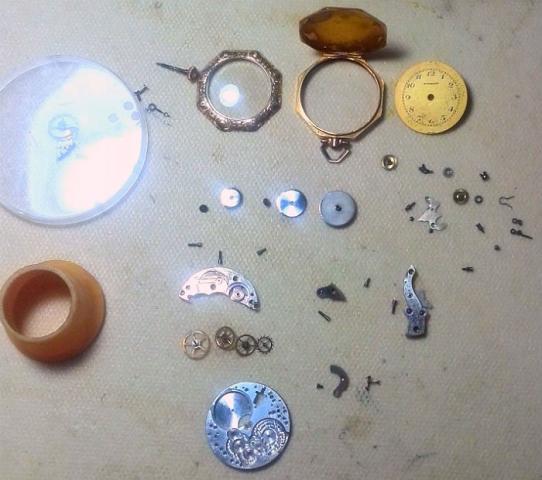 I know I'm probably stating the obvious here and that it's probaby already been said.

Looking at the line of models released between 1917 and 1925 it's easy to see how Bulova progressed from an unknown watch manufacture to one of America's top selling watch brands in such a short space of time.

Around 1915-16, the 'Rubaiyat of Omar Khayyam' book had a lot of publicity and print time in newspapers all over America. Someone at Bulova was smart enough to see that they could capitalise on this and produce and market a watch with the same name, the 'Rubaiyat'.

At this time Bulova themselves probably weren't that big of a name when it came to watches so it probably made little sense to put their name on the dial and movement, so I beleive that they did the next best thing and rode the hype that was associated with the Rubaiyat name. Thus we see their very early watches with 'Rubauyat' on the dial and movement.

As time passed and sales of the watch increased (every woman had to have one), I suspect Bulova realised that not only did they now have a product that was a great seller, but also they had the revenue from the sales to start a proper national wide marketing campaign. Bulova started to rebadge their Rubaiyat watches to another famous name, the 'Lady Maxim', which also started to contain a movement marked with Bulova's own name.

Again riding on the success of the 'Rubaiyat' and 'Lady Maxim' names and associating themselves with those watches, Bulova had the confidence to start branding their watches with their own name 'BULOVA'

We can see the progression of the watches over the years from the Rubaiyat, to the Lady Maxim, then finally to the Bulova branded watches. 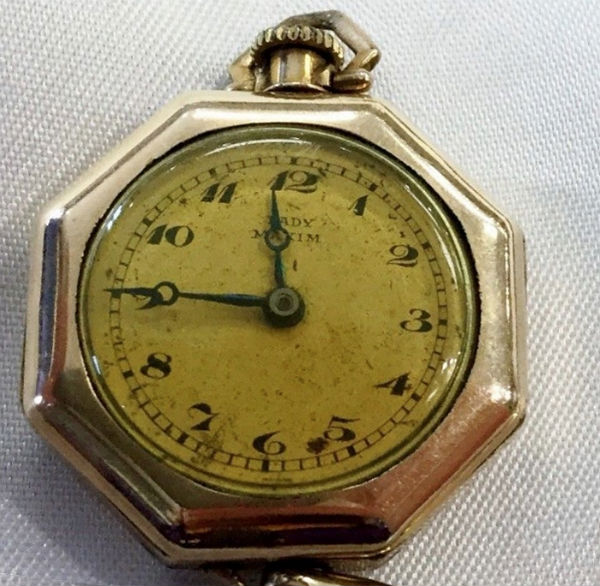 Note the dial font, hands and crown cover are the same as the Rubaiyat watch listed above. 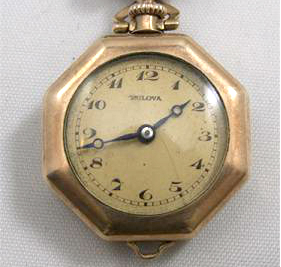 Again whilst this is nothing neccessary new, I now have a stronger belief that this is how Bulova went from an obscure watch manufacture in the early 1920s to a powerhouse in the industry just a few years later.

Most of the watches in our database have a mixture of year dates, which I suspect still need some refinement, once we have a better understanding of how the case serial numbers work.

Excellent write-up Stephen. Not much question here, 1920 Rubaiyat and a real beauty to boot!  I believe you are correct about the second number being a "0", the curvature of the bottom that is impressed appears to be the correct shape, as opposed to that of a "6" or "8".

Well done Stephen, she's a beauty. I can't help but wonder how difficult it is to wind it. Does it seem like these watches started out as pendant (pocket) watches that morphed into 'wristlets' at some point?

I suspect that Rubaiyat's were always manufactured as a wristlet watch. I don't think we've seen any without the bottom wire to suggest that they were ever sold as a pendant watch, unless they went by a different name (pre Rubaiyat).

They are a little different to wind, near impossible when worn on the wrist, but otherwise about the same.

My feeling is that Arde was the guy who really moved the company down the watch path, as Joseph started the J. Bulova & Co. as a jewelry wholesaler and manufacture.

I've also found previously this states that John Ballard also had a big input into the company selling watches.

'It would take the intervention of his seventeen-year-old office assistant, John Ballard, however, to fully persuade Bulova himself of the marketability of wristwatches. Hired at the age of thirteen, Ballard—who would later become the acting president of the company and a forceful proponent of continual innovation for almost fifty years—was given a large amount of watches by a client in order to resolve a debt.

Only seventeen, Ballard convinced Bulova to allow him to sell the watches, which sold quickly and profitably. This revelation, combined with his decades of experience crafting quality clocks and pocket watches, led Bulova to reorganize his business.'

What I do find really strange and a key focus to any and all research I do, is to find the watches Bulova sold between 1900 and 1916, if they did at all. We see absolutely no adverts advertising or mentioning Bulova manufacturing or selling watches, despite what has been written here about Bulova early days. There are plenty of notices about the company, but nothing really until 1918 relating to watches.

Further to this, companies like Elgin and Gruen were selling ladies 'wristlets' as early as 1912.

Also I've found an advert showing mens wristlets as well, which are basically what we call a wristwatch.

What I find interesting is the positio n  of the crown and orientation of the dial.....normal....and yes it dated 1913.

Much has been claimed in regard to who 'invented' or popularized wristwatches. Notably, Breguet built one in 1810, but I have seen bracelets with small dangling watches that go much farther back, the 16th century. These were designed for and worn by women.

There is an often repeated claim that the soldiers of WWI were the first to use and popularize the wristwatch, but this is incorrect. Girard Perregaux marketed military wristwatches for the German Military in the 1880's, and wristwatches were popular among Soldiers of the Anglo Boer war.

As to whether this 'caught on' when the men came home is up for debate. Wristlet watches or bracelet watches were seen as feminine well into the 20th century, especially in North America and the UK.