a beautiful, yet still unknown model.  Now you have two!

Watch service using super glue, interesting concept although I suspect it won't stick with us too long,(sorry, just had to throw a glue factory joke in there).

These really are nice looking watches, I can't help but wondering if this was a bit of a retro look back to the 30's.

Could this be yet another Bulova Academy Award model not yet identiffied?

This from a 1952 Crystal catalog. Measurements are close. Could be a not yet seen Bulova Thornton. Overlay shows it to be the perfect shape.

Looks like the Bulova Academy Award mentioned above has a different size case as those take a GS CMY304-10 23.0mm x 18.2mm crystal.

I think you may have solved the mystery Stephen. I don't have this particular crystal in stock, but I popped the crystal out of the watch and compared it to the G-S MY302-10 in the catalog and it's a perfect match. 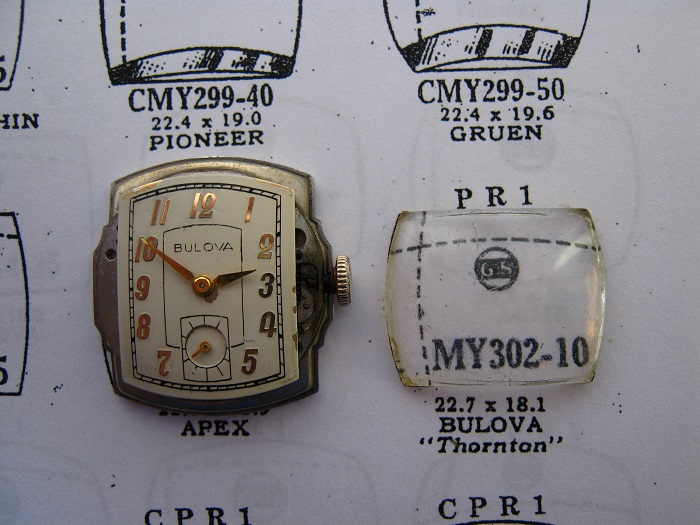 Unless someone knows of something else this crystal fits, I think we've found the "Thornton". I'm excited. Stephen may have identified a new model. What do the rest of you think?

Nice one Alan. Looks like you got it sorted  (stick witth it . You seem to be all glued up or should that be clued up ) :-) It will fit the case but the curvature from the 12 to the 6 position is just a tiny bit too much and it's a domed crystal and the sides of the crystal make the minutes track hard to read when looking straight on. I will try to locate a G-S MY302-10 crystal and report how it fits when I do.

Good sluthing.  Wonder if there are other models listed for the crystal specs of Thorton (G-S MY302-10)?   The curvature is kinda unique, so I'd be good with a tentative Throton based on crystal specs.

Sorry Alan, I will resist ID by crystal spec as I always have. I've seen too many that just didn't work out. In all cases I defer to the panel consensus.

Looking forward to seeing if the 302 is a better fit. If so then I'm a tentative Bulova Thornton.

Also interesting that the 304 fits the Bulova Academy Award, which I mentioned shares a similar case design.