The Story of a Boy, A Soap Box Racer and a Bulova Watch 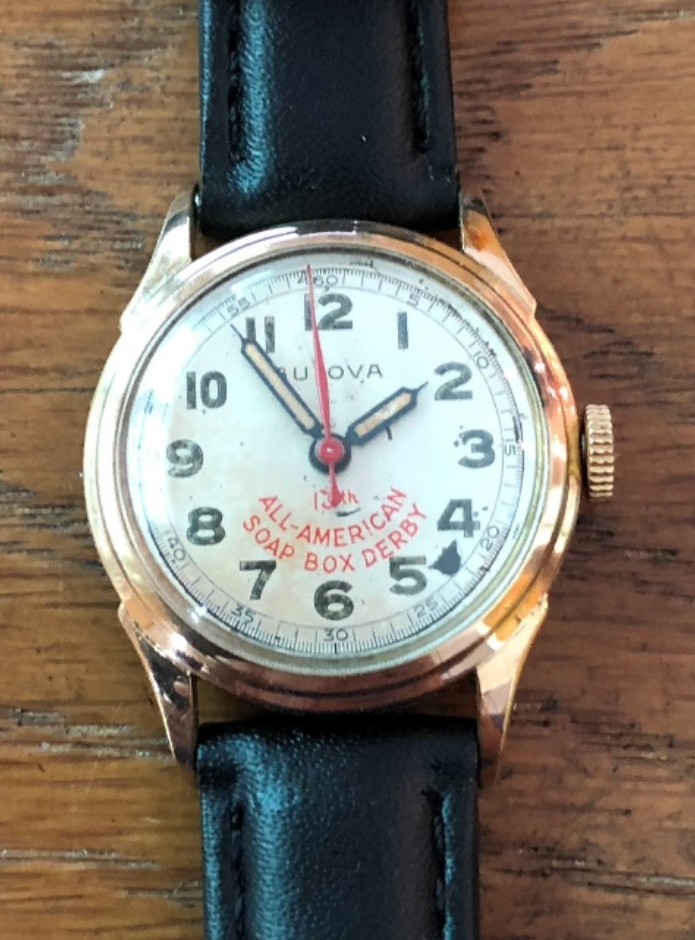 In Mid-Century America nothing was more important to young boys than the annual Soap Box Derby held each year since 1937 by the All-American Soap Box Derby organization. Boys and their Dad’s would spend months working to build their plywood racers to compete in one of the hundreds of local races.  Incredible care was taking to construct the most aerodynamic and fastest cars using inspiration from the latest jet age designs of cars and planes. It was every Dad’s aspiration to have bragging rights of their young son’s accomplishment so considerable effort was put into working with their sons to build the best racers. Beautifully painted and immaculately upholstered these racers were judged on craftsmanship, design and speed.  Popularity was immense especially in rural America where there were few distractions for young boys. Often the Derby races were front page news in local newspapers with communities busting with pride about the accomplishments of their local competitors.

It was every child’s hope of winning the race and receiving one of the large number of prizes donated by local businesses. A local winner was assured a showering of great prizes like radio’s, fishing equipment, money, even a beautiful new watch but the real prize was a trip to the National Soap Box Derby held each year in Akron, Ohio. The local derby winners were treated to many fun events like, parades, guest speakers, campfires and entertainment. On the last evening the racers were treated to a large banquet where the winners and participants were presented with awards and prizes.

For many Americans, Bulova watches were cherished items and the Bulova Watch Company did a considerable business with sporting groups and large corporations for award watches. The Bulova Watch Company and Chevrolet recognized the popularity of the Soap Box Derby and became big corporate sponsors of the event and for many years would provide an engraved watch to racers for their championship wins at the regional Derby races. This was a coveted item and in many cases was a young boys first real watch leading many of them to become lifetime customers of Bulova watches. Recently I was fortunate to acquire one of these championship Bulova watches from a friend who found it at a yard sale. The watch is a small round boy-sized sweep second model with luminous hands and hour markers. The dial is stamped in red “13th ALL-AMERICAN SOAP BOX DERBY”.

On the stainless steel back it is engraved “AWARDED BY CHEVROLET TO T.R. PAULES FOR WINNING THE SOAP BOX DERBY 1950.”

The A9 Bulova Date Code on the back indicated the watch was a 1949 model. 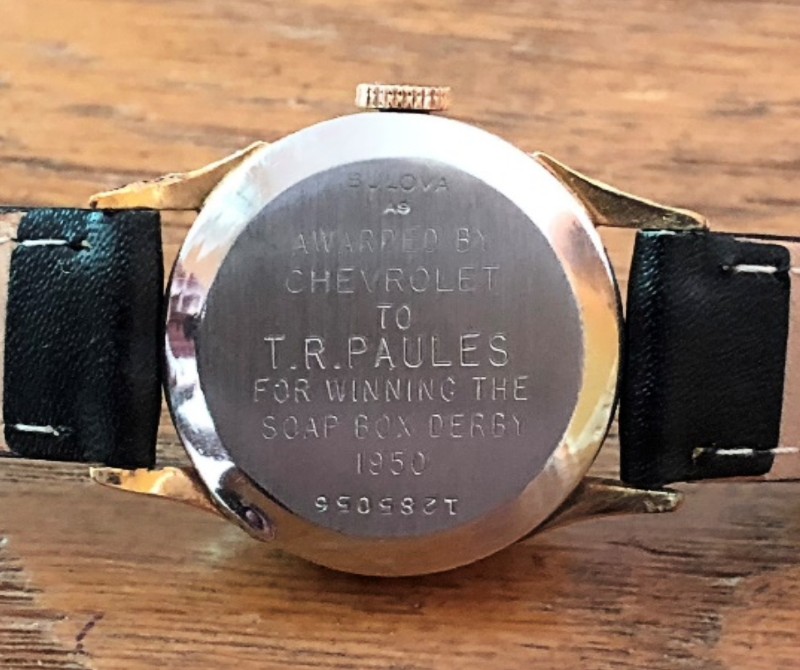 As a collector of vintage watches with a love for Bulova watches and a bigger love of engraved and personalized watches, I set out to find out what I could about TR Paules whose name was engraved on the Bulova Watch case back. After a quick Google search turned up nothing I searched www.Newspapers.com and found a treasure drove of history on TR Paules that presented a fascinating historical narrative of this young man and even provided a direct reference to the Bulova watch.

The first reference was in the July 19th 1950 edition of The Gazette and Daily Dispatch (York, Pennsylvania) which amazingly provided a picture of Tom Paules and his Derby racer along with two other winners of the pre-race awards. I now had his full name and, more importantly, a face of our winner. Thomas is seen (left) with his “Checkered Flag Model Shop” sponsored Soap Box race car where he was presented with the award for Best Designed Racer. 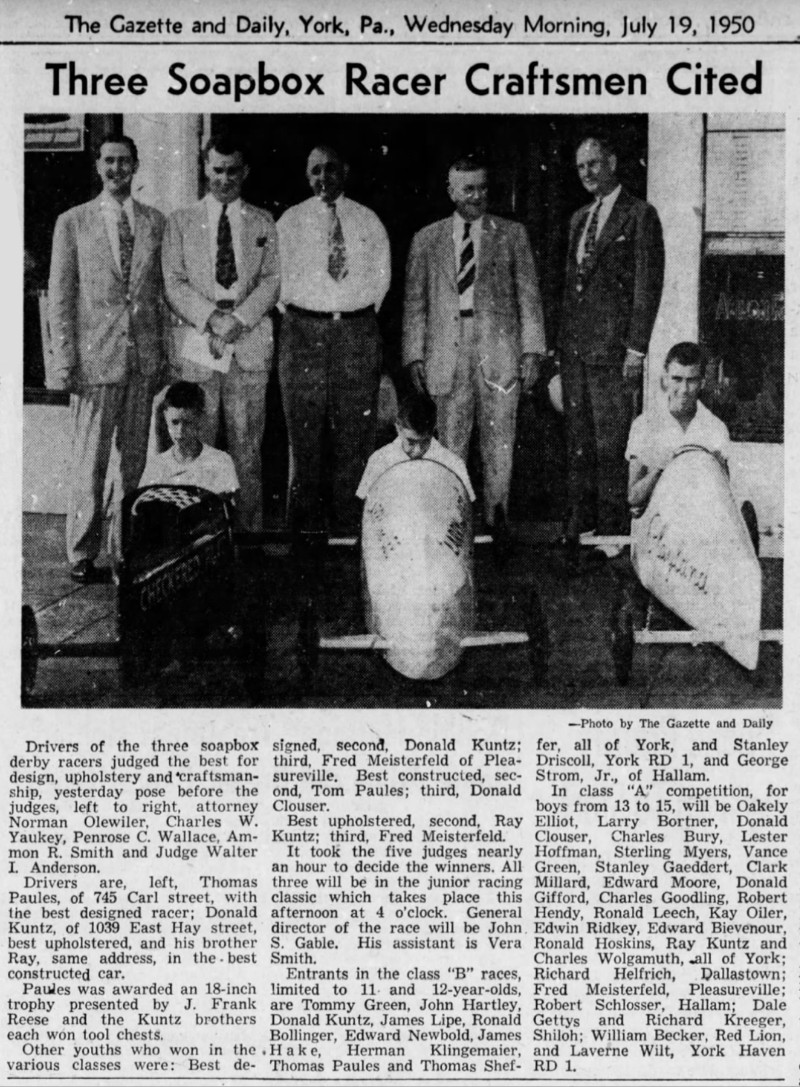 With new found excitement over my photo find, I had to dig deeper to see if there were any additional articles about the race and the now identified champion.  It did not take long to find a front page article from the 20 Jul 1950 issue of The Gazette and Daily Dispatch (York, Pennsylvania) describing the events of the day and results of the race. Making the front page of the newspaper was a very big deal in those days.  Turns out 11 year old Tom Paules was part of a local Soap Box dynasty as his brother had won the York PA championship the prior year of 1949.

What I did not expect to see when I followed the continuing story onto page three was an amazing photo essay of the race. Here we see the actual championship race with Tom nosing forward across the finish line as onlookers crowd the sidelines and cheer for the boys. We also see a great photo of a very proud Father, brother and our young racer being congratulated after the race, still decked out in his “racing helmet” and York PA Soap Box Derby t-shirt. 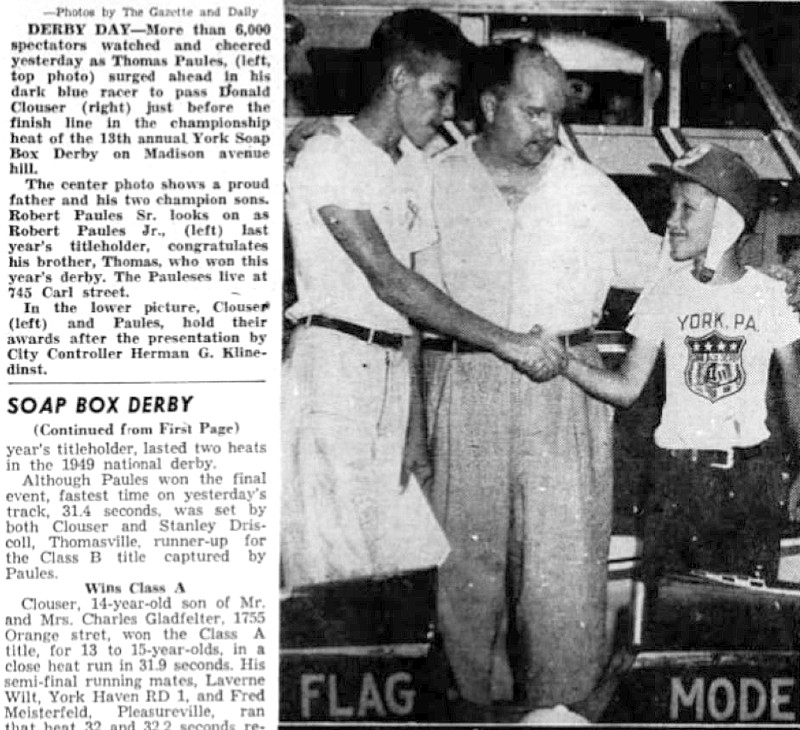 One of the joys of winning the Soap Box Derby is a very large trophy to proudly display at home along with some great prizes.  Local merchants and organizations provided a prize assortment made up of every young boy’s dreams.  Here we see a smiling Young Tom (right) having “Christmas in July” with his trophy and a few prize winnings including a state of the art radio.  How great it is that the newspaper photographed this moment, saving it for posterity. 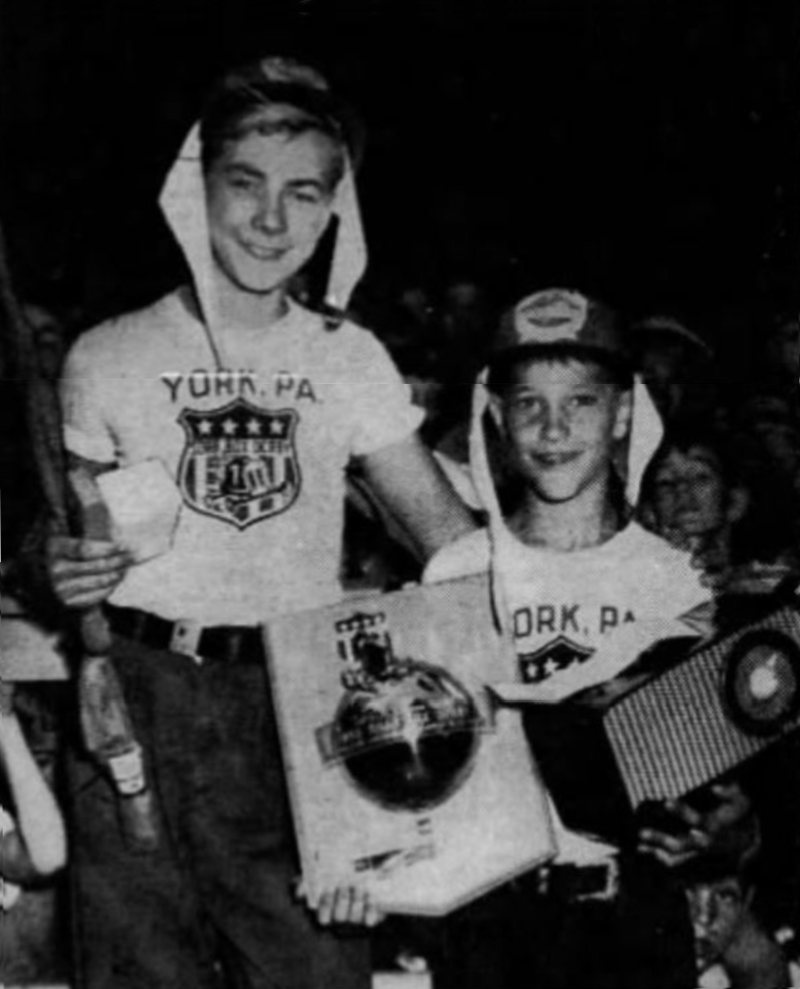 As the local Soap Box Derby winner, Tom earned the honor of representing York, Pennsylvania at the National Soap Box Derby in Akron, OH later that year.   Several weeks later Tom and his father packed up the racer and headed out to Akron for the event.  We can imagine what Tom might have thought about the whole experience but fortunately we do not have to. On September 30, 1950, The York Dispatch (York, Pennsylvania) published a first person narrative written by Tom Paules himself about his entire Soap Box Derby experience.  In the article he talks about the three months he took to build the car and his disbelief at winning the final race in York.  He discusses the trip to Akron and all the fun events at the National event hosted by the City including the parade he participated in.  As a special treat the 147 racers from around the country were even treated to a personal appearance by Jimmy Stewart and Hop Along Cassidy.   At Nationals Tom did not win his race heat and was eliminated from advancing to further rounds but certainly had an amazing once in a lifetime childhood experience.   In his final recollection, Thomas says “At the banquet Sunday evening we were given a gold wrist watch and many other nice things.”  I want to believe the 11 year old proudly wore this watch for many years much like the championship rings of Football players. The watch was the engraved Bulova that somehow ended up in my possession 70 years later. 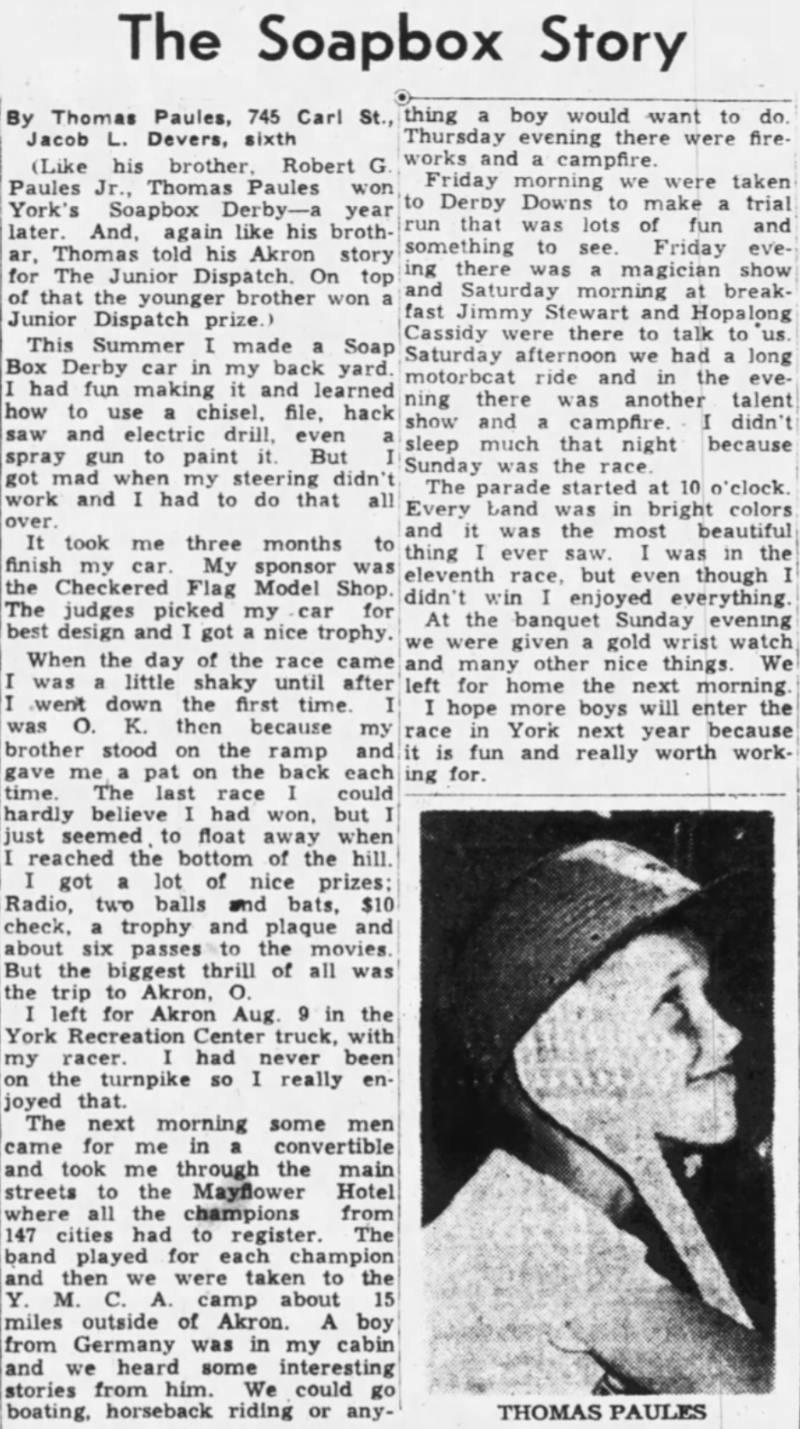 Unfortunately Tom passed away in 2004 but is frequently mentioned in the Look Back section of the local York, Pennsylvania newspaper on the anniversary of his 1950 win. How this Bulova watch ended up in my collection is probably a long and winding story but I am proud to be the latest owner.  I am thrilled to share the story of the meaning of the engraving and a little about Tom Paules with the reader and his amazing soap box derby experience. Cherished mementos carry so much meaning and this Bulova Watch, which was very special and well earned by a young boy from York PA, now resides in a new home but is no less cherished. 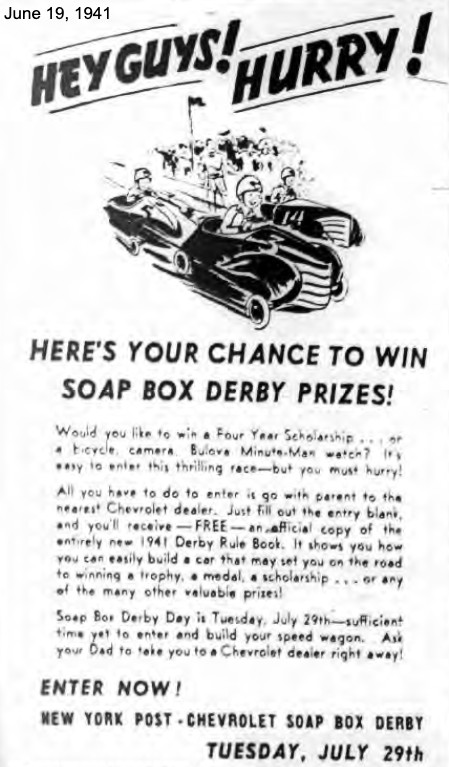 The ad is awesome.   Thank you for adding it to the story.