From my very amateur and limited search I can not find another 18k gold square Bulova??  The case looks to match a  1967 Vacheron Constantin (is that OK to say in a Bulova forum 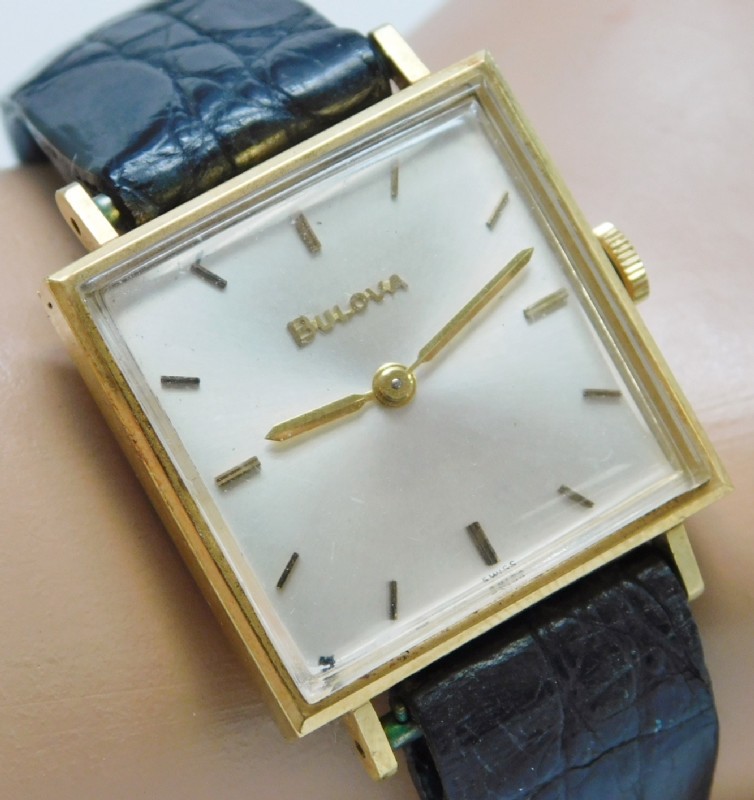 It has me a bit puzzled, the inside case marks seem to indicate it is indeed gold and made in Europe. The movement has an import stamp (BXW) indicating the movement was shipped to the US from Switzerland for assembly in the US.

but I have yet to find a reference to the watch being cased in solid gold. I'm still looking. It's possible that it's a European market watch that has had a movement replacement in the US, as the movement date appears to be M8 and case is M7.

Tentative ID from me is 1967 Craftsman (International Market), we will see what the rest of the panel thinks.

THANKS for the reply and information!

is that a "flaw" that the movement date and case date don't match?  Is it ever the circumstance that from the factory the movement would be newer or older than the case?   Is it your thinking that along the way the movement was replaced?  (And I should now be searching for a M7 movement)?

It's not uncommon to see a year difference, There is only 24 hrs between Dec. 31 and Jan 1. Leave it the way it is as it's considered correct. My replacement question/observation is  just speculation based on the case being likely Swiss  made and movement import stamp seems to indicate the movement was imported to the US. Generally when we see a European manufactured case, the movement lacks an import stamp as the watch was assembled and shipped complete to the US, or sold outside the US. There might have been  a different set of standards for solid gold cases. The movement and case may have been imported separately to the US and assembled here to perhaps dodge import fees - who knows?

Mybulova doesn't have a lot of production info or ads in the database on Internationally produced models, so it may be 100% correct and I'm overthinking it out loud.

I found this watch for sale.  It looks like the same case except it's gold plated and they do not mention a style name.

Bulova would import movts as ebauches, which were unadjusted or unfinished, and then finish them in the US.

However, unfinished can and did mean different things. Bulova would almost always modify the balance, so the movt ebauches may have been shipped without balances, we just don't know.

Unfinished to avoid tariffs could also mean simply unadjusted, although they almost certainly were adjusted. Final mods and adjustments would of course be done when the watch was being prepared for distribution/sale in the US. Bulova had the luxury of being able to complete watches in Europe due to their Swiss Factories, and also in North America.

At one point the largest watch manufacturer in the world, Bulova innovated in many ways, not the least of which was making in-house calibres, both Swiss and US made.

If Bulova were still doing this, Bulova mechanical watches would cost thousands.

1967 Bulova Senator wth what looks to be an original band.

I missed that ad, looks like a match! Well done Stephen!

I don't understand.......I just saw about 6 diffrent watches that were all called "Senator", made by Bulova and most had "seconds" at the 6 o clock position.    Most were square shaped but found not one like mine.  (google search).

I am not doubting or unappreciative of the info that has been  shared with me - just trying to educate myself.

I would have thought Bulova used style names to distinquish at least there case design??

Name styles went by the year basically, and watches  changed periodically. Sometimes after only a year or two. There were also variants and name changes based only on face, color, band, engraved case decoration.

Looks like this case/movement/ face configuration is a Craftsman in gold plate and a Senator in solid gold. It can sometimes be pretty complicated to ID a watch.

Go to the mybulova homepage and click on "model name" and pick Senator from the drop down menu. You will be quite surprised how many different style watches there were over the years that were named as such.

I completely missed the ad that Stephen referenced.

After seeing the ad, I have to agree that it's a 1967 Senator (assembled in the US in a Swiss produced 18K casing)