Swiss Made, NOS Swiss 18 kt solid gold Bulova Accutron wristwatch with black leather band, The band has a Accutron tuning fork logo gold clasp with "Bulova 1/2010 KGE" on the bottom side opposite of the tuning fork logo, The band also has "ACCUTRON" printed in gold lettering on the under side of it, The dial has the Accutron tuning fork logo representing the 12 o'clock position and "Bulova Accutron" underneath it in raised gold letters, also "SWISS" is printed in black letters under the 6 o'clock symbol and It has gold hands, underneath on the bezel right side top lug and left side bottom lug is a stamp containing the Swiss symbol for 18 carat gold and was the head of Helvetia, the female national personification of Switzerland, which is also called the Confederation Helvetica (CH) or Swiss Confederation. The name is derived from the name of the ancient people of Switzerland prior to the Roman conquest, the Helvetii. The female figure of Helvetia appeared during the construction of a Swiss national identity in the 19th century and Helvetia appeared on coins and stamps after the foundation of the federal state of Switzerland in 1848, under the profile is the letter "C" which is one hundred in Roman numerals possible denoting that 100% of the case is 18k including the back cover locking ring unlike the cases made in the USA which were not 100% 18k because they used a stainless steel back cover locking ring and in some cases stainless steel battery hatch and setting adjustment tab were also used on them. On the angled portion of the case back it is stamped with "BULOVA 18 KT GOLD" and "PATENED WATER PROOF" and on the flat portion it is stamped with the serial number "1-375782" and under that is "M5", It also has the very rare 18 kt solid gold case back lock ring, The back cover inside is stamped with the case #451, The Movement is stamped with "214H BULOVA" and "SWISS MADE", It also has the original box and hang tag. 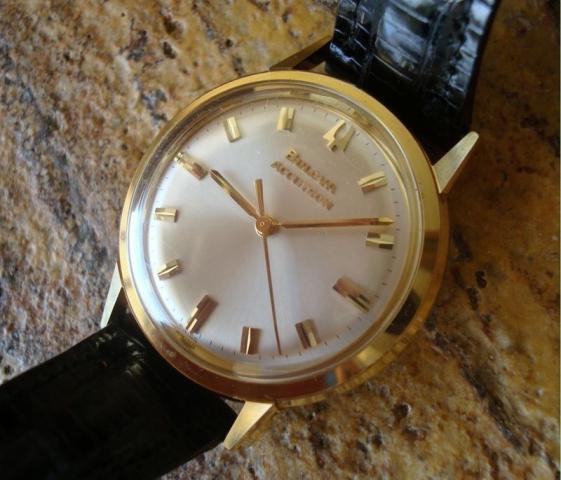 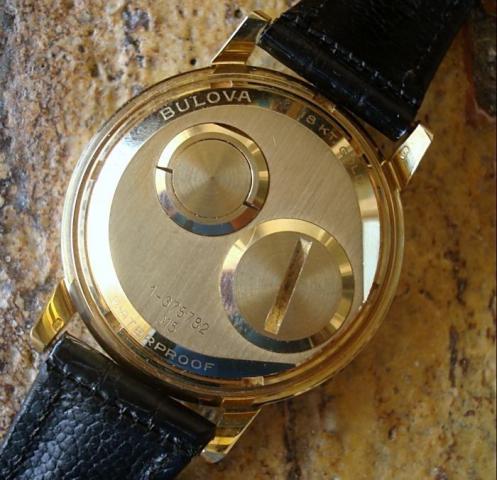 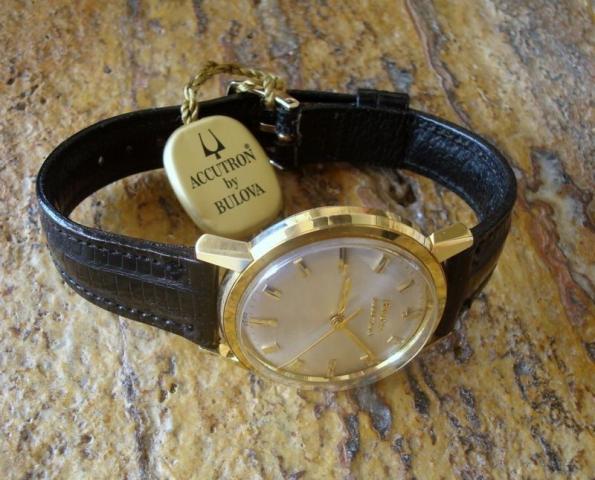 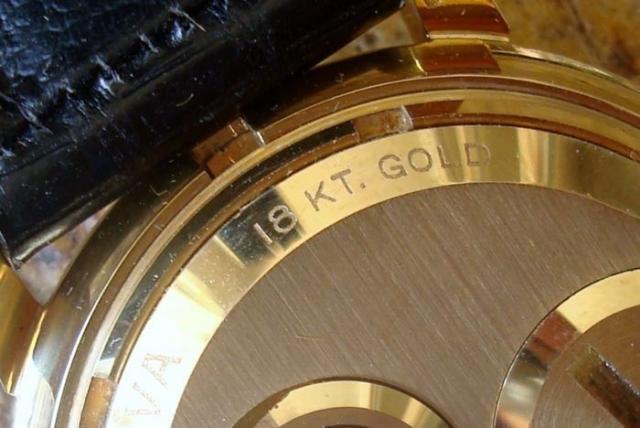 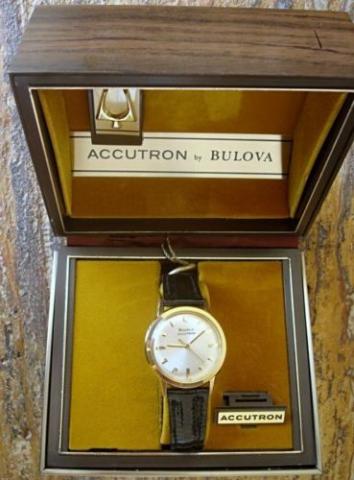 Wow what a beautiful watch. 214 Accutron from me.

Thank's i just can't get enough of this watch, I even bought some white cotton gloves so i can take it out of the box and hold it, it's def much heavier than any of my other Bulova Accutrons that i own with the exception of my "Bulova Accutron Navigator Mark II Analog 24 Hour Ship's Chronometer" and my "Bulova Accutron Spaceview Retro Clock", those two are both made out of solid brass and a lot of it, lol I'm learning from the best, all of you here at myBulova ! i've been looking at accutron tuning fork watches and reading all about them here for a long time and i always wanted to have a beautiful watch listed here to and now i do, I'M SOMEBODY NOW ! lol

Truly outstanding watch, but sorry, "K" is not a match. Dial, hands and lugs are different. Lugs are tapered and match "O" in the ad, dial matches "N" (batons at 3,6,9, are longer, "K"s are all same length), hands match "J".

Wow you are right about everything you just pointed out, Great eye for detail !

Hi chopper, welcome to myBulova. I can see why you 'head over heels' for this one, it's grand! I collect NOS watches so I'm especially appreciative of this one.

We definitely will catalog this one as an Accutron 214. It is possible that we'll find those pages some day and nail it down even further.