Probably about the 4th or so rarest specific individual Bulova Accutron.  The platinum and a couple of specific solid gold modfels are rarer. A 1960 Accutron 214, Asymmetric Stainless case with 14K "bat wing" inlays, "coin" dial.  VERY few were made, fewer still exist, especially fully functional as this one is. 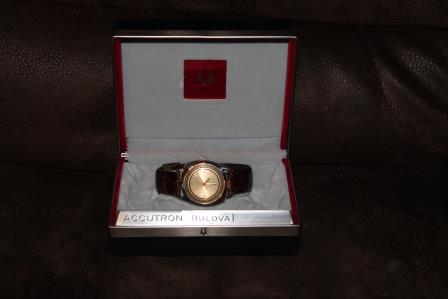 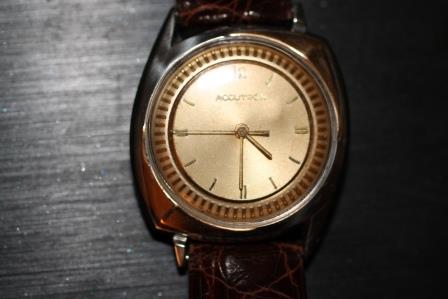 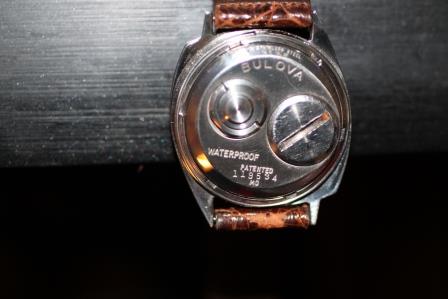 (The Asymmetric with the black coin dial, if I can figure out how to add tht pic here, is just a picture, to show what this model looks like with that dial.)

One of the rarest, and certainly most under appreciated, of the Accutrons because few know just how rare it is.  Bulova was pushing the Accutron as a luxury watch and in 1960, with only 3 months of production, few Accutrons were made.  They were pushing the solid golds, and relatively few Stainless models were produced that first year.  Of them all, the rarest of the rare were the Asymmetrics with 14K inlays (as opposed to the Asymmetrics with 14K bezels, of which more were made).  And since they weren't solid gold and, as time passed, they never achieved the popular fame of the Alpha, the Spaceview or the Astronaut models, fewer of those "old" watches were kept around by people.  And during the couple years of really high gold prices the many of the still existing Asymmetrics with their large 14K inlays got scrapped for the gold, as did many solid gold watches.

This is a professionally refurbished, fully functional, 214, with a new indexing mechanism (about the only mechanical part of a 214 that ever wears out) installed 2 years ago, just some very, very few minor surface scratches, you can even see, in "real" life, the vertical machining marks on the back of the case.  It actually looks better "in person" than in these not terribly high quality pics.  And I even have an original tuning fork buckle leather strap, a good condition vintage case, an original Accutron "coin" tool, and a spare coilset.  (I kinda traded another coilset and some other parts for the repair/refurbishing.)

About the only way it could be improved now is if I could get a black coin dial for it. They came with white, gold, and black, and the black is real hard to find, but look fantastic on this model Accutron.  (Anyone have one?  If you do, please contact me.)

It isn't actually for sale, but if someone ever offered me what I know it's really worth, I'd likely change it to "for sale" status.  But as it isn't one of the popular Astronauts or Spaceviews, or solid gold, and few realize how rare it is, I seriously doubt anyone ever will.

This one is variant "203", we have several in the data base already, here's one example:

This one is variant "203", we have several in the data base already, here's one example:

For some reason, they're real hard to find.  Pretty much only collectors, and not lots of those, have them.  Probably 'cause they didn't get famous/popular, not many were made (in 1960), and a lot of them got scrapped because those inlays contain a good amount of gold.  I'd call them the poor man's really rare Accutron.  It took me several years, and two different 1960 Asymmetrics w/inlays, to put this watch together.  One had a good case, one had a good dial, etc.   And then I still needed a new indexing mechanism.  No longer having good enough eyesight for really small work, I sent everything off to Bob Piker at Mybob.net to get the case cleaned up, indexing mechanism installed, and everything put together into one watch.  I traded him everything that was left over, plus one of my spare 214 coilsets, for the work, and he did a real good job.  But I did keep a NOS coin dial, just in case I ever needed it.  I'd LOVE to find a Black coin dial for it, though.

Would appreciate you sharing the manufacturing records for these early Accutrons with us as there isn't much info out there, and if you are able to shed light on the production numbers that would be fantastic.

From what you are saying I gather you have some recorded information of how many were made of each type. This information would be fantastic to make public so that we all know what's truely rare and what's just hard to find.

We currently have 3 of these in three database....this one will be the fourth.

I do wish I had hard numbers.  What I do know is what I dug up back about 12 to 13 years ago when I first became interested in Accutrons, from various sources.  Probably the most useful were  a couple people who were Bulova dealers back when the Accutron came out in 1960 (one of whom is still in business, dealing in vintage timepieces, including Accutrons),  when they were only sold in Jewelers' and big deal stores like Tiffany's in NY, one guy who "inherited" Accutronology (Is that a word?) and training from his father and another who came by it through a grandfather, said dad and granddad both having been Bulova/Accutron dealers/jewelers.

So, some Accutron tidbits which are at the very least interesting:

Bulova salesmen used to show up in limos (with, I'm told, a chauffeur), go in the store, and check all the stock.  If a jeweler was found selling any Bulova at a discount from what Bulova said they should, they'd confiscate the stock, write a check for the value, and the guy was no longer a dealer.  Bulova was apparently a really big deal watchmaker in its day.

There were only some 3 months of Accutron manufacture in 1960, starting in October.  The release had been delayed, supposedly at the request of the U.S. government, who didn't want the USSR to get its hands on the technology right away.

The original publicity campaign pushed gold.  Some 500 jewelers thoughout the US were given a solid gold model with the face removed so the movement was visible, as a display. I think it was the Alpha, but I'm not 100% sure about that.  The original emphasis was on solid golds and gold filled or rolled gold plated (no gold electroplate until later on when it became economically necessary, I THINK that was near the end of the '60s).  There must be a fair bit of gold in gold filled, I remember that during the scrap gold craze a couple years ago there were people buying "solid gold and gold filled" watches, but not gold plated.

In types of materials, stainless models were made in lower quantities than golds the first year.  Look at the price tags on some NOS Accutrons. You'll find non-solid-golds (gold filled) somewhere around $150, which is over $1200 in 2016 dollars.  That's NOT an economically priced watch.  Accutrons were aimed at the real upper middle classes.  Marketing apparently felt stainless didn't have enough "snob appeal".  Even the stainless Asymmetrics had either solid 14K inlays or solid 14K bezels.  And according to one then-dealer, Bulova didn't ship as many with the inlays as they did with the bezels.

The Spaceview was kind of an accident.  Customers saw the faceless display models, thought they were cool or something, wanted and bought them.  Jewelers had to ask for replacements from the salesmen.  Bulova caught on to the unexpected demand, and started shipping kits to jewelers to allow them to convert regular Accutrons over to what became called the "Spaceview".  They started designing a specific stainless Spaceview from the ground up, partly to sell more units and partly because in '61 they'd started getting short of solid gold cases in the face of this unexpected demand.  Can you imagine not having ENOUGH solid gold watches to meet demand?  The first factory-made stainless Spaceviews, with a chapter ring and specially printed crystal, shipped sometime towards the end of 1962. (Hint: any 1960 or 1961 Spaceview is almost certainly a "conversion", but might well be an original jeweler's display or a jeweler's conversion.)

Accutrons and the railroads:  The Accutron was the first wristwatch ever certified for use on the U.S. railroad system.  That's why you'll see "Railroad Approved" on some Accutrons.  Back then (yes even into the '60s), railroads depended mainly on absolutely precise time accuracy to avoid conflicts and even collisions.  Conducters were allowed to use only pocket watches.  Before the Accutron, no wristwatch could maintain acceptable precision because of the effects of its being in different positions relative to gravity while being worn.

Accutrons and Space:  After the Mercury Program, (the first US space flights, one single astronaut in the capsule) NASA decided to standardize astronauts' wristwatches.  Omega won the competition.  The Accutron apparently wasn't even eligible because Bulova hadn't certified it (or maybe couldn't?) as dustproof.  Yet NASA used the Accutron for all the timekeeping in the spacecraft; in commo equipment, navigation instruments, and such.  The US also used them in military satellites.  It was the most accurate and precise (two slightly different things) timekeeper of its time, outside of large labarotory type instruments.  An Accutron 214 movement was in a communications relay placed on the moon during the first moon landing.  This connection with the space program is believed to be how Bulova came up with the name "Spaceview".

As is fairly well known, the Seiko Astron, the first quartz movement watch, introduced in 1969, was the death knell for the tuning fork Accutron.  The quartz movement was just as accurate and precise as the Accutron.  In fact, technically, it was even better, but the difference is so tiny no human would ever be able to see the difference  (we're talking thousamdths of a second).  But.... it was quite a bit cheaper to manufacture, putting it in reach of tons of people lower on the economic ladder than were those who could afford to buy most Accutrons.  While Bulova tried cost cutting strategies like heavy use of gold electroplating instead of so much gold filling or rolled gold plating, making many more and more varied stainless models, and even an "Accuquartz", a sort of hybrid between a tuning fork movement and a quartz movement (apparently designed to bring the Accutron equal in absolute technical accuracy and precision with quartz movements) Bulova "gave up the ghost" and stopped production of tuning fork movements and started making quartz movements in 1977.

P.S.  If by some chance someone wants to know the difference between accuracy and precision, I'll run it down in another comment.