My dad wore this watch most of my life. He died last year and my mom asked if I wanted it. She tells me the crystal broke and it's been sitting in a bag in her jewelry box for the last 10 to 15 years. She thinks he brought it back from Korea in 1960 when he got out of the army. When I got it there was no Crystal and the dial was badly corroded. From the research I've done on the web and mostly on your site, my best guess is that it's a 23j, judging by the ad of all the 23s that I looked at here but I'm not positive. I got it with a gold Speidel stretch band which looks like the band he always had on it while he wore it.  My daughter wants to wear it as a pendant to remember her grandfather. His name is etched into the back with some decoration. Other than that the back seems to be like all the other 14 karat gold 23s I've seen pictures of. The face used to be white with the gold hands and numbers and Bulova 23 jewels and self winding on face. Inside the back is stamped Bulova, 14K gold, and New York. There are also some markings scratched into it. They are hard to read but it looks like R 10303 and H 2463AP. I'm going to try to pick up another donor watch, or a dial and Crystal so that my daughter can wear it. It may have gone in for a cleaning once or twice, but other than that Dad wore it every day and there was never a problem. My daughter doesn't care if it runs, and I haven't wound it but I think it will run fine. I started disassemling it before i found this site with the help of a collector friend and his tools, and just with handling and the self winder it's moved 10 minutes or so. 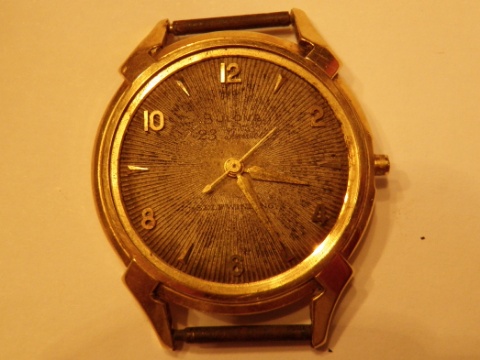 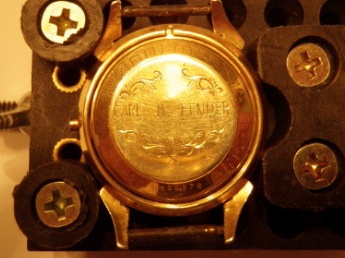 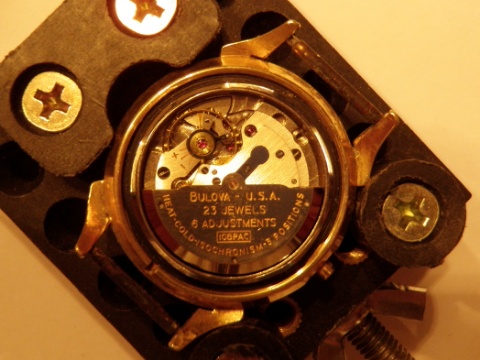 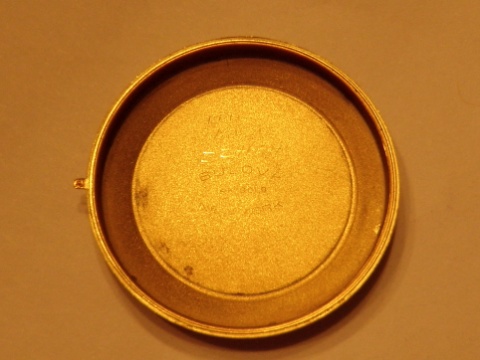 It's definitely from the "Bulova 23" series, variant unknown to me. There were a lot of different variations of the 23, but not many in solid gold. It's definitely worth fixing, especially because it's an heirloom watch. You are fortunate to have it. Thank you for sharing it with us.

A very nice  story and heirloom piece you have. There are not many Bulova 23 14K ads, but one possible match is the 'J' variant. I can't tell if the lug design is a match, since the ads are not that clear: 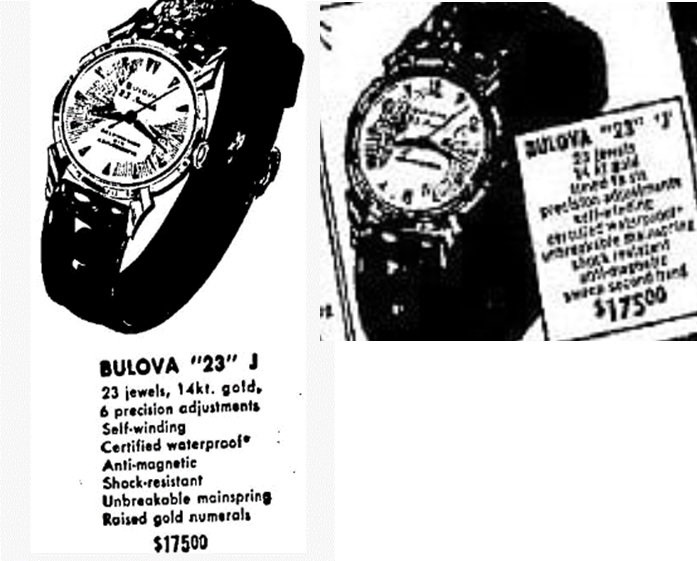 The pricelists have this J variant as a Yellow color. The ad on the right appears to have the matching dial to yours, with the even numeral markers.

There are also companies that can refinish the dial. That way the original dial stays with the watch.

At the bottom of the caseback, below the serial number, should be 2-digits, an L#; what is this code? The same coding should be on the movement also, on one of the plates. These will determine the date of the watch.

I think you got it Ken. The lower right lugs in both ads appear to show the distinctive "step" where lug overlaps case. Proportions appear a little "off", but that can be written off as artist rendition. Bulova 23 J.

As the price of gold fluctuates over the years, so too do watches and other jewellery get melted down when gold goes high. It is always a treat to see a gold watch that has escaped this fate.

23 J works for me, and there are enough of these around that a watchmaker might be able to replace that dial with a cosmetically better one.

I also strongly recommend that the watch get fully serviced by a certified watchmaker- it will be clean and running well, and will last for many decades to come. I say this because wearing it without being serviced will cause it to run- it is an automatic, after all- and watches that are dirty and dried out with no lubrication can and will damage themselves by being run.

The back is marked L6. There is actually a 56 Bulova 23 exactly like mine on Ebay right now for just under $200. If the crystal was good I might grab it. I'm not a collector, but I do love all things mechanical and have a thing for machined metal. I also have a watch that was my great grandfather's. I used to watch it run with the back off when I was a kid. He was an engineer in NY and I believe it was his 20 year watch. A 1917 Bunn Special 60 hr. That will also go to my daughter eventually.

I do have a question on the dial and crystal. I see bulova 23's come up for sale on ebay...are dials and crystals the same size for the diferent models? I may be able to get a "donor" for those parts, and any others that may be useful. I don't really want to spend much, and since i have an "in" with someone whose been collecting and repairing watches for 40 years, I'll probably go that route and have him help me refurbish and lubricate this watch.

Also, any recommendation for someone who may be able to refurbish the dial would be helpfull. Can't hurt to look into it. I have a feeling picking up another dial and crystsl, or a donor watch, may be more in my budget.

Just found the date stamp on the movement. Also L6.

I agree the Bulova 23 "I" and "J" models were both priced higher than the other models based on the solid gold cases. The "J" variant is a good match for the subject watch.

I think you'll be able to find a donar on ebay for the face, although it'll probably be from one of the cheaper models. The crystal should be easy enough to replace, if not with a genuine Bulova, then with a standard one with the correct diameter.

You could have your watchmaker send the dial to be refurbished, I have used International Dial in the past.

Not all dials from 23's will fit other 23's. It would have to be the same movement and the same case size.

In general, solid gold watches are inherently worth preserving, there are fewer of them around. There should be no issue getting a crystal, you don't need to get one off another watch. The crystal industry is alive and kicking.

Corrosion on the dial may mean corrosion under the dial, your watchmaker will be able to address this during the service.

What a great story Rexracer. I agree with my fellow panel members, don't buy a donor watch until a qualified watchmaker has determined that you even need donor parts. International should be able to restore the original dial and any watchmaker can place a new crystal. As Reverend Rob states I would also recommend the full service. I'd also be wary about how to wear it as a pendant, making sure that its attached to the necklace in such a way that is can't dislodge and be lost. I love the idea that your daughter is gong to carry on your fathers tradition, that's wonderful.

PS - why not wear it as a wrist watch? add a nice alligator strap and it would be beautiful.