According to G-S Crystal catalog no. 60, the Champion and Senator "A" take different crystals, Senator "A" hexagonal (CMH406-60), and Champion has a tonneau crystal (CMT350-40) which it shares with the 1950's Minute Man. This indicates totally different shaped cases.

As for evidence of "lumping" different watches together under the designation "similar", you say "it makes no sense, and we have no evidence of it being done before,"  yet you yourself put evidence in another post, namely my 1953 Seabee.  Also, there is the 1936 ad for the Commodore which mentions the Apollo as if it were the same watch, which it was definitely not. Also, the 1942 ad showing the Brewster and listing the Attorney below it as though the only difference is the metal colour, when they both have different case/crystals as shown in other ads and crystal catalogs.

EDIT: I have just been looking at the ad that Admin posted and there is a"Bulova23", with 3 different bands available. No Different letter designation, just different  prices.

Regarding the Bulova 23 in the mid 1950's, check out the different letter designations, all for different case shapes.  : )

Bobbee, what's your thought on the advert above?

Whilst it shows that the band does indeed make a difference to the model ID it also highlights the challenges we face here when trying to be accurate with the ID process.

It would be good to hear the thoughts of other panel members on this one.

Sorry, but the above statement about the band making a difference to the model ID in this ad is incorrect.

Stephen et. al.  In this instance, the mount may indeed indicate a different model (not variant).  On models (or variants of models) for which we have an ad that brings up this possibility, I would say tentative two ticks is appropriate.  If we don't have an ad or other documentation indicating this possibility, I would say three ticks, as I don't think we should ID based on what "may be" if/when we find another ad.  The models for which we have this discrepency are not many, so it's OK to have as tentative in these few instances- IMO.

The ad above does raise questions, like "plain case" for "Champion".  If there exists reasonable doubt based on ads like this, two ticks tentative helps indicate these discrepencies. 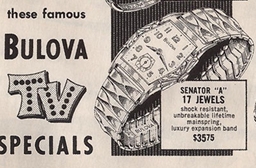 The first ad pictured is a Senator "B" Will...

interesting Will, the ads above are showing 2 different Case designs for the 'SENATOR' "A".

Top advert is actually for the Senator "B" but does show that the letter variant was based on the case design.

heh, My bad admin - time for an eye checkup!

Time for an eye checkup for me is more like it. I just had them checked two months ago, but I think I'm gonna go to a different Doctor. I go to my current Optimist's office twice a year for a checkup, but he just keeps telling me "...don't worry, your vision will get better..."