Note: I have not removed the case because I don't know what I'm doing, so I don't have movement information.  Really wish I could do it because it would sure help with dating.

This is one confusing watch.  The S/N starts with 6, which originally made me narrow it down to 1926, -36, or -46.  However, the box says "27" which could mean 1927.  To further complicate things, I've found Bulovas from all three decades, and even from the 50s and 60s, which have a similar style to this one (though the ones from the newer decades seem to have much more modern looking numbers and often show only the even-numbered hours).

Similar watches I've found include the Adelines, the La Petites, and the 1930s Lady Bulovas -- but none of them are exact matches.  It seems Bulova made many, many ladies' styles -- and for several decades -- with the rounded square shape and corded band.  I don't think I've seen any 1920s Bulovas that use the cord-type band, but the band could have been replaced at some point.  Also, the Miss Americas from the 1920s that I've seen tend to have oblong faces.

The watch was handed down through my family.  I don't know the original story but interestingly, we have several occasions (births and marriages) that happened around 1926 and 1946 for which this may have been presented as a gift.

Box is light blue, embossed all over with Bulova signature and central gilt logo. The watch seems to run correctly. 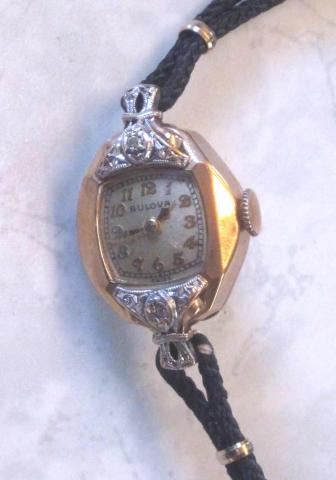 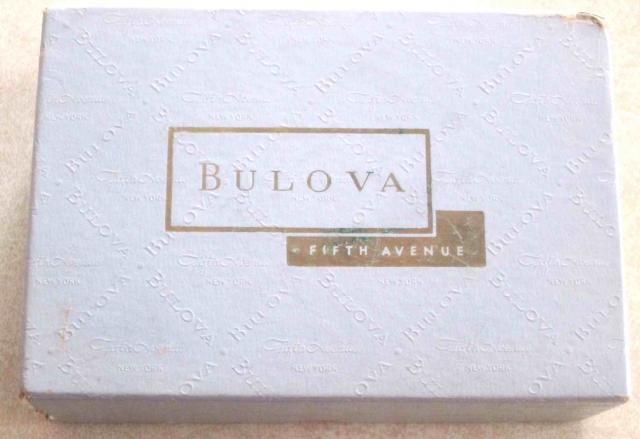 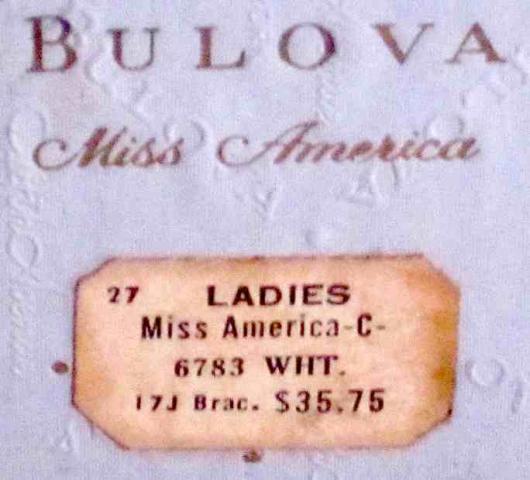 Nice Ladies watch.  I'm thinking that it's probably from the '30's or even 40's, but the cord band is a good point.
Also looking at the box tag for the Miss America.  The tag notes the watch case is white gold, so perhaps this gal ended up in a box of another watch?
Great that you have family heirlooms to keep and pass on to your heirs.  Too Cool.

Looks like the tag also states Bracelet as opposed to the cord band.

Hi Peanut. Your watch isn't from the 20's. It's more likely a 1936 or 1946. I don't know much more than that about it at this point, but wanted to caution you not to get brave and try to take the movement out. If it's running and you've never removed a movement before, PLEASE don't attempt it now. The balance wheels in the movements of these ladies watches are as fragile as butterfly wings and they have just enough clearance in the case to allow them to swing. So just be patient for the time being until all the staff gets a chance to evaluate it for you.

That's probably going to be 1936 probably.  Relly nice looking.  I'll take a look at the ads and see if we have something to help coroberate your box tag.

Box tag says White Gold and Bracelet Plains.... Me thinks it may be in an other-than-original box.

A Miss America "C" is listed in the Spring 1955 Price Lists w/ the same unique Bulova product ID number (6783).  This is not the diamond dial section of the price lists.  Note the conformation of White gold case.  This is the section of the price list which indicates new models AND/OR older models which have had a price change (increase) since their original or previous price. Hi peanut407, welcome to myBulova. I'm a big fan of these family heirloom watches, Congratulations on having a very nice one. I think the styling of this watch places it in the 1940's. I've looked through all of our ads for that period but don't see a match, several that are close though. I'm not sure that the box you have is relevant to this watch, to Will's point the 'white gold' marking eliminates it for me, although I'm not sure a 40's era Bulova came in a style like this, certainly nothing earlier did.

Thank you for the help everyone!  I, too, wondered if the box was switched.... You are right, nothing about the label really matches this watch ... the 'WHT.,' the 'brac.'  Perhaps there was another watch that was owned later and the two were stored in the newer box from that point forward.  If so, I don't know where the 2nd watch ended up but I am very glad to have this one.  I've never worn it because even though I appreciated it, it was never my style, but tastes change & now I think it is beautiful.  If I were to have it cleaned up and serviced, who should I look for -- a jeweler, or watch repair?  I wouldn't want to take an antique heirloom to just any old "while you wait" watch shop.

As for the case, no worries there.  I'm not touching it.  I tried one time to get it open, but when it didn't happen easily I said 'enough.'

Concerning having it serviced Peanut, if you know of a jeweler in your area that's been in business for 30 years or more, you should start there and just ask them if they service mechanical watches. If they do, ask lots of questions, like is it done on site or shipped out. Ask them what all a service entails. It should be completely disassembled and cleaned and reassembled and oiled and checked for accuracy. It's not likely that you will find this service at big jewelry store in a shopping mall. They usually have someone that knows how to change a watch  battery, but that's it.

You should also ask about the cost. It will usually be in the ball park of $70-$80. If it's significantly less or more, that's a red flag. Keep looking. And if you can't find anyone locally, I'm sure someone on here can recommend a good watchmaker.

Thank you so much for the info!  I have a jeweler who does his own work (doesn't send anything out).  He definitely hasn't been in business for 30 years (he's 35-40ish) but he has cared for our jewelry for a few years now and I think he would tell me if he wasn't comfortable working on it.  It just so happens that he has one of my rings now, so when I go pick it up I'll have to take the watch to show him.