The top image vs. illustration was added later to show what appears to be the correct CASE with a dial and likely also movement, variation? The Attorney and Emperorer BOTH utilize the same crystals, so perhaps this photo is of an Attorney? However this watch clearly sports the yellow gold filled case, vs. "pink" gold... And "AGN" (Applied Gold Numerals) on the dial... The REdial also appears incorrect? At least in respect to the (dual) lines on the outer minute track, in the illustrations. And of course there may also be a third model as well, since this case design and it's variants were apparently fairly good sellers!

So perhaps a '42 "Attorney..." in the photo?! And apparently this design, influenced the "Squadron???" 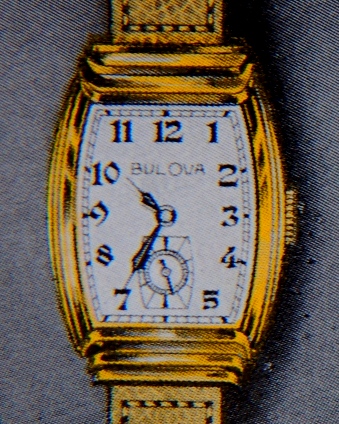 Scott, do you have the ad confirming the identifcation?

It'd be great to confirm yet another model.

Here's the earlier 1942 Ad of the Brewester which looks close incidently.... though it mentions the Attorney as well but it wasn't pictured.

There's the 40s version of the "Brewster..." as well as a "Gedney" and "Gedney Junior," (Boys size, perhaps? Or just a rescaled Gedney!?) that are also similar. (I just sold a Gedney glass last night.)

And THANKS for posting the early 40s "Attorney" model. I was wondering what thatone lOOked like!

From what I'm seeing in the ads the models are similar yet differ.

The Attorney has a hood feature across the horizontals of the Bezel and came on a Suede leather strap.

The Brewster has plain horizontals and came on a matching bracelet.

The model shown as the Emporer appears to have a double hood detail on the Bezel which is unclear in the ad of its closest match, The Attorney..

For what it's worth.

"ATTORNEY"  is also Rose Gold with Black printed numerals on a Rose dial, leather strap according to the new ad and not mentioned prior.

Great description ! - very informative as the details for correct identification are important. Still appears to have a hood on the bezel horizontal, although not as clear in the Montogomery Ward drawing.