This watch belonged to my grandfather.  I inherited it on his death in 1983.  It was inoperable, without a band, when I received it (along with other bits and pieces in his "oddball jewelry" box).

I took it to Bowers Watch and CLock Repair in Atlanta in 2011 to see if they could get it working - they did so with a simple cleaning, and I now happily wear it on the most special of occasions.

The case and face appear to be an exact match for the 1940 Standish model shown in the vintage advertisements on your site (note specifically the ad image on your website for 1940, number 5 of 36, with the Standish in the upper left corner).  The movement is a 7AP 17-jewel with an Omega data mark.

The case seems also to match a1940 Marshal in your database, but the face is different and the crystal is clear rather than amber.

The original band is long gone (my best guess is that my grandfather lost it at some point during his WWII service, but that's pure supposition on my part).  I added the modern leather band that you see in the photos.

The back of the case shows wear-through of the plating on the corners and edges - this watch was well-used and worn often before being relegated to the jewelry box! 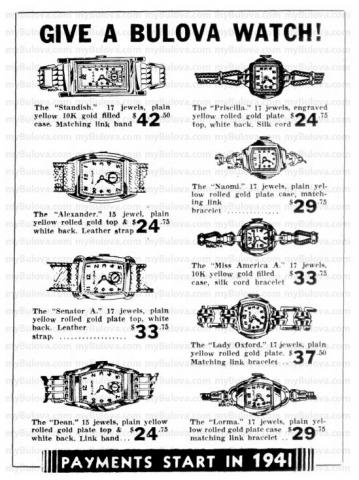 Hello crazypoet, welcome to myBulova. I think it's very cool that you're wearing your grandfathers watch, I'm a big fan of heirloom watches. Vintage watches worn regularly should be serviced regularly, it might not be a bad idea to have it done again soon.

I agree with the Standish ID, it's a fine looking watch. Here's another example in our data base.

Here's a full size of the advert

Thanks, all!  This is an extraordinary resource.  Thanks also for the reminder on servicing - I'll take it back in for a cleaning/TLC promptly