If somebody can help me with opening the case then I can get more information. Mark's original comments in the previous post rings true here, without the gold band, it's a Craftmans. The movement data will only establish the year of production which we know will be many years be4 1981. I'll bet it's a 7AK 21 J dated late 40's as the one I have.

There exists a one to many relationship.  The one watch/case can be either of two model names if the band isn't present.
In the recent past, DarHin had mentioned these few instances, including the "one to many" idea, although he used different wording.  He also suggested some fairly simple "solutions".

I could not confirm subject watch is the Tuxedo or the Craftsman w/o the band.  It would be "unknown" which of those two is was.  Not even tentative.  But if there were a single "group model name" for Tuxedo/Craftsman, I could confirm it was indeed one of those.  If we find another watch which has the gold band, I could confirm that watch was the Tuxedo only.  By having one "group model name" w/ both models included, we could confirm ID w/o dealing with mounts/variants. The times this scenario come into play are very few at the model level (perhaps only the Tuxedo/Craftsman), but by having this "group model name" it would function like a "generic" model name does when we deal with- for example- the generic "clipper" containing all letter variants under that generic name.

DarHin did a much better job explaining this concept....I just can't find the thread or PM where he did so.  Food for thought, and perhaps it shoud be addressed via PM or a seperate forum post.

This is where things get very blurry for me. The Tuxedo also came on a leather band, and had the same subdial as the Crafty in one ad at least.

it's blurry for me to Rob.  If I got the details messed up a bit, I guess I was going with the theory. It may be the Tuxedo came on both lether and metal mount, but I'm not sure.  Others will know, but it may be something for PM or forum, if it needs to be addressed at all.  I was mainly re-thinking DarHin's good suggestions on this and some other similar "issues" in light of subject watch.

Craftsman "A" if it is Yellow Gold, "B" if it is Red Gold...Case serial numbers start to get foggy for the correct year after 1946, but it seems that if the case back didn't have a date stamp, the 1st number in the serial is pretty accurate for a year call. betwen 46' & 49'

Until we have the correct movement info and photos, not much we can do but speculate...Which we do so well : ) 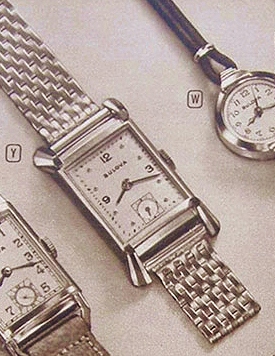 Rob could you list the link to the Tuxedo that shows it with the leather band, that might help to clarify the issue.

Here is the Craftman link.  Riddle me this... without an original band how can one make a determination on which one it is?

in that serario Jay, one couldn't and it would be unknow which of the two it was.  But my point, on DarHin's suggestions was, if we had a "model name" (in this one instance) which was "Tuxedo/Craftsman" we would not have to differentiate between the two.  I could confirm it's a Tuxedo/Craftsman.

JP  Rev is working like 12 hrs a day, so may be unble to post that now.  With the new/in development ad search function, we can search for ads of Tuxedo and maybe find one ourselves.  ....or the absence of one.  I'll look now.

The craftsman has a workmans leather band and not a dressy leather band as the subject watch has. IMO this watch will remain an unknown until it has been opened up and we see what the movement is and if it has a date code. I am in agreement with Will that we may have to establish a model name of Tuxedo/Craftsman in  order to confirm.