Hello, I am new here and I would like to know if this watch is dated from 1928 or 1938. Also, is the glass on the back of the movement original? The golden age of the Bulova Chronograph

In the early 1970s Bulova produced a number of iconic Chronograph watches. These original 70s timepieces are highly sort after by vintage watch collectors with a number being reintroduced into the modern day market as part of Bulova's 'Archive Series', ready for a new generation of watch enthusiasts to enjoy.

See extracts from the original Bulova Line Books from 1970 through to 1973, showcasing these incredible chronograph and deep sea chronograph watches, including the famous Bulova Stars & Stripes and the newly re-released Bulova Surfboard.

Can someone confirm whether the case back on the deep sea chrono is friction fitted or screw down? I suppose I should know but it is not apparent to me and I don't want to do anything until I know for certain. If it is a screw down, is there a specific wrench to use and does someone want to part with one? 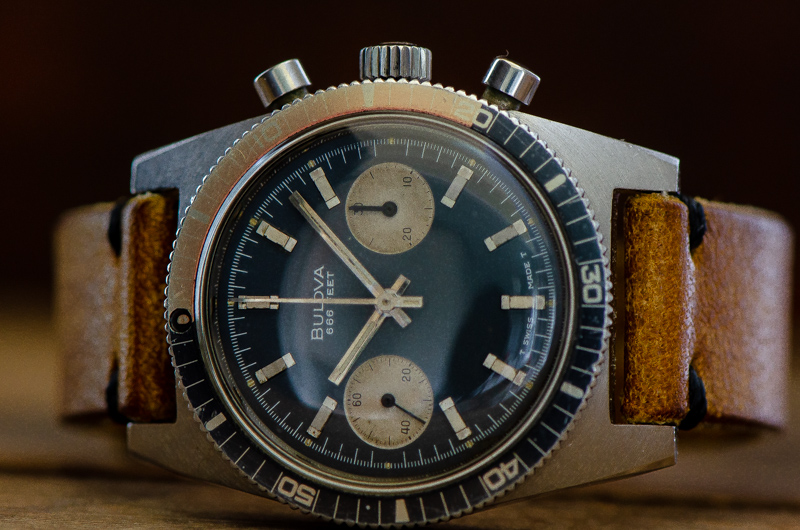 My name is Jesse and I'm based in Sydney. This is my maiden post so hopefully I've done things right. I'm not a professional watchmaker but more of a part-time hobbyist and on my plate lately, I've got this Bulova 11 ALACD that has a missing winding stem and crown. Moreover, upon investigation have found one of the reversing wheel (i think that's what it's called) has a broken pivot. This works in tandem with another reversing wheel and are in charge of winding the mainspring in both directional swing of the oscillating weight.

I’m just wondering if anyone would know the measurements of the hour and minute hands of the gold dial ‘57 President G. I figure I’m not likely to find original parts on this one so if I can get an accurate length I might be able to find something really close. To the best of my limited knowledge they are black fils. Any help or advice would be more than welcome.

I'm looking for a NOS (preferred) or aftermarket crystal, or part # if no one has a crystal, for a Bulova Accutron 218 D, Case #2663. The crystal  measures exactly 29.65mm (according to my calipers). I've searched high and low for the part # with no luck.  Any help would be greatly appreciated! Thanks - Andy 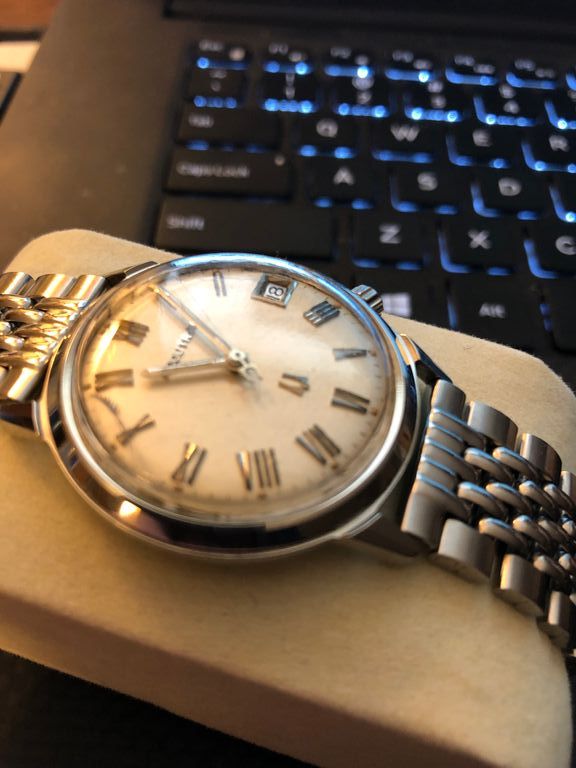 I have a vintage Bulova Deauville/Lady Lindy where some of the vitreous enamel inlay is missing. Esslinger sells a material for the purpose of replacing the inlay called Ceramit but I hear it is difficult to obtain good results. Do you have suggestions for the repair? After applying for permission for a trans-Atlantic flight several times and being denied, Corrigan (of Irish descent) took off on July 17, 1938 from Floyd Bennett Field in Brooklyn, New York with a flight plan filed to return to his home in California.  He later landed at Baldonnel Airport, in Dublin, after a 28-hour, 13-minute flight.

After receiving a severe backlash from U.S. flight officials, Corrigan claimed he accidentally flew the wrong way, and stuck with his story.  Thereafter he was dubbed "Wrong Way" Corrigan.

From 1950 to 1954, Bulova sold a collection of both mans and ladies watches called the "Academy Award". The series was a huge hit for Bulova, but also a legal nightmare.

Read the amazing story behind the famous Bulova Academy Award series and see the many varied models Bulova produced over its four year lifespan.

In February 2014, before the public knew of the existence of this watch, myBulova.com sent an email to the owner Dave Scott, requesting permission to release the first photograph of the Bulova chronograph wristwatch worn by Commander Scott during the Apollo 15 mission on the surface of the moon.

It was with great pleasure and delight that on March 21 2014, myBulova.com was the first website in the world to publicly acknowledge the existence of this watch, the first and only Bulova watch to be worn by an astronaut on the surface of the moon.