Some Bulova Newspaper ads of interest

Started this post to share a few of the more interesting vintage Newspaper ads I've found recently.  Some have new information and models listed.  Some are just interesting to show marketing used at the time.  The dates of publication are confirmed from the top of the publication.  They may not warrant a spot in the ad database, but are noteworthy.

Here's one from December 1933, found in the Wilkes-Barre Pennsylvania "Independent".  The watch on the top right is listed as "Miss Princeton".  Doesn't look like a ladies model to me. Perhaps a typo? 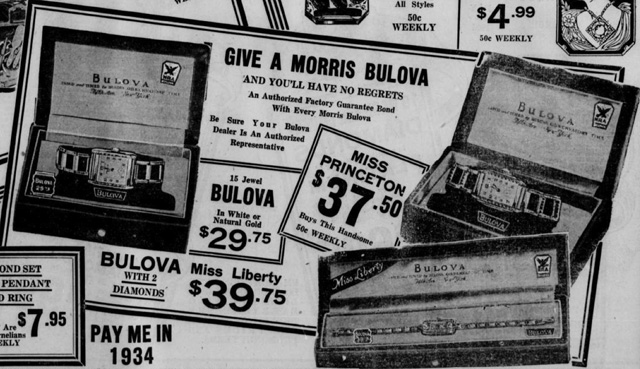 This next one shows a watch currently listed in the database as "unknown".  The ad is from December 1949. It's a shame so many of these ads I'm finding don't have model names associated with some of the watches listed. 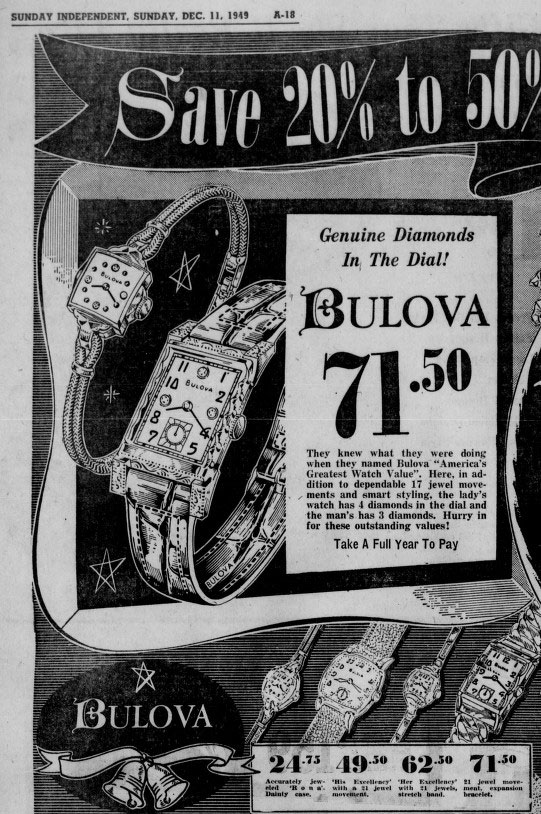 Next is one of several ads from the very early 1920's which shows watches without model names (or numbers).  We know at this time many of the watches had numbers for names.  Apparently too boring to list the model numbers, so these ads don't give much, if any, new "information".  This one's from December 1923.  I don't think I see Bulova on the dial either, but noted the little "whited-out" area on the band w/ the wording "BULOVA"

which suggests this was a Bulova-generated watch graphic. 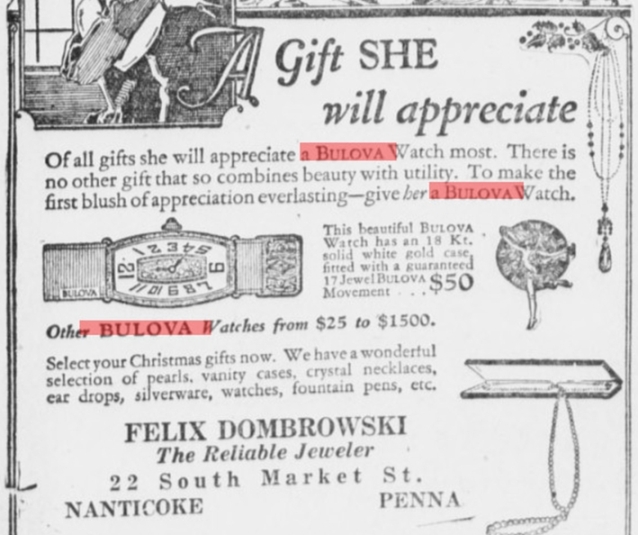 Some of these medium-size regiospecific jewelry stores continued to advertise without any model names/numbers throughout the 1920's (as in this June 1925 ad below).  Maybe they just wanted to get customs to their store, and then sell them what they had in stock.  Conversely, advertisements in the large publications and magazines (Saturday Evening Post, Cosmopolitan, Look, etc...) were sponsored by Bulova, so it was important to have a way for the customers to id the watch they liked from "Bulova production", not necessarily store stock.  Bulova marketing staff were using model names with appeal- something the boring "model number ID's" lacked.  We see some of these models previously named by numbers with attractive names in nation-wide ads by end of 1925, but not necessarily in the smaller newspaper ads. 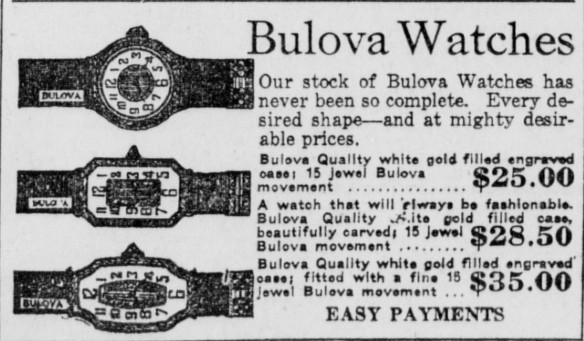 The use of Model numbers not names on the early Bulova Watch Co pieces supports the notion that the 'Lady' Maxim 'Hudson' Maxim and Rubaiyat Watches advertised by J. Bulova Co in 1922 (pre Bulova Watch Co) were Watch brands and not Model names.

The 1933 Morris ad above showing the 'Miss Princeton' is interesting as the Watch depicted does not follow the traits of known Ladies pieces of the era, compared to the 'Miss Liberty' below the image looks like a Gent's piece.

The ad for the 49 three diamond dial is the first one I've seen for that model. Such a tease that there is no model name mentioned. I've been searching for that ad for years now! At least now I know my watch is not an Excellency with a movement swap. Nice find Will.

Well Bob it might not be as unfamiliar a name as we think:

Plains, You've done it again! Fantastic! I ask the panel to evaluate my 1949 unknown as the Tuxedo.

Still seeing lots of the smaller newspaper/jewelers ads showing models which may not have been in production at the time the ad was published.  Maybe the jeweler just liked how the watch graphics looked, or still had some in stock, even though they were older models?  This Aug 1929 ad from "The New Holland Clarion" shows two models which I thought were produced earlier in the 1920's. 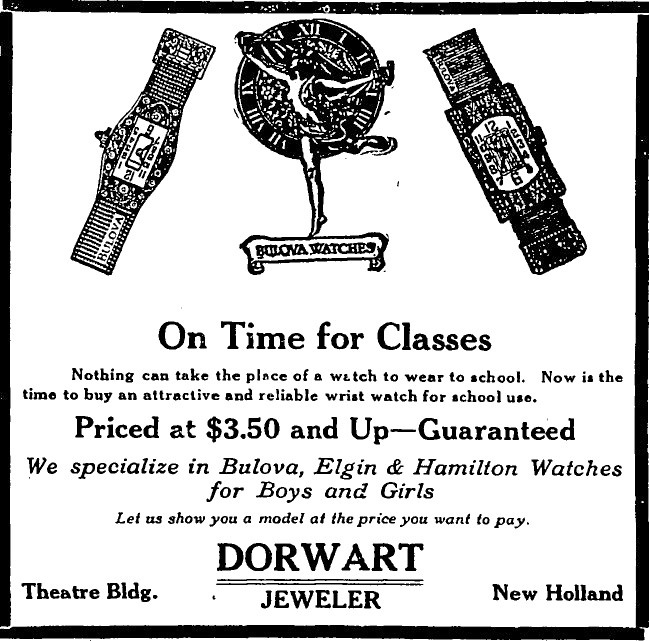 Beautiful watch Mark.  I hope it's yours, or there's at least enough info to warrant it being added to the database regardless of ownership.  Very nice!!!

I haven't looked yet to see if we have better quality ads for these models listed by model numbers.  This is from October 31st, 1926. Poor image resolution, but model numbers/description legible. 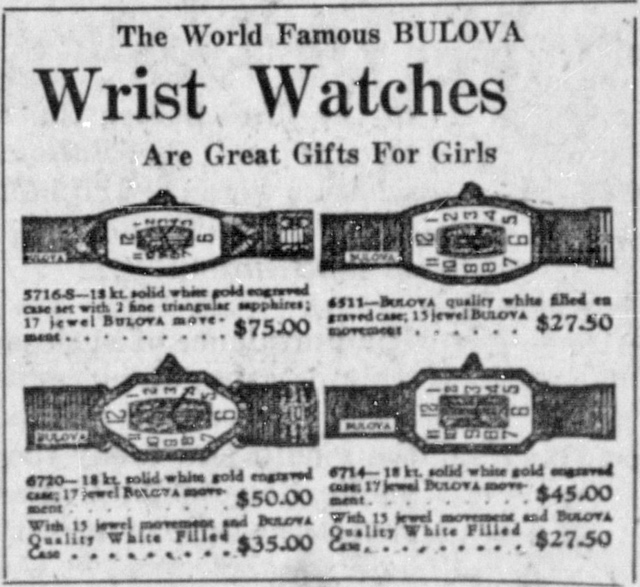 We already have a much nicer 5716-S, but the ad above tells us "2 fine triangular sapphires".

Every little bit of new info for these old Gals helps, but the above resolution is very poor.  I have a higher resolution copy I'm trying to clean up and supply to Admin, if it's even worth including in the ad database...
I'm looking for "19K gold filled" and "16 jewel movements".....but it's almost a prayer.

We have better ads for Ambassador "A" and "F" in this time period, but I don't see a "D" variant in the drop down list or in the ads.  Here's a July 1958 ad showing all three mentioned above, including a black dialed "D".

In the July 23rd 1953 edition of the Fort Covington NY Sunday paper. There's no question this was in the paper on this date....full ad has day/date at top of page. The exact same ad ran in the Sunday paper the week before and the week after this date.

Marvellous find Will! Totally debunks the myth of no AA's after 1952!

Well.....maybe not "totally".  This one newspaper ad ran three out of four Sundays in July 1953.
IMO this only suggests Connell's Jewelry store ran the ad in their local newspaper.  It's a regiospicific newspaper.  It's not like "Bulova" ran the ad; Connell's ran the ad.   Perhaps they had lots of these watches in stock and no one told them they shouldn't/couldn't run the ad.  The wording is as interesting as the date of publication.  "For the first time ever..."  Is this referring to the AA "OO" being available for the first time ever?  Or for the first time ever "...at the lowest price ever"  If the Academy Awards "OO" was produced and marketed in 1951 or 1952, then one could argue Connell's ran an ad from a previous year.
If we find more examples of like this, or a large scale or national ad done by Bulova (not one of it's distributors), then we can say more about the date of marketing vs the date of ad publication. 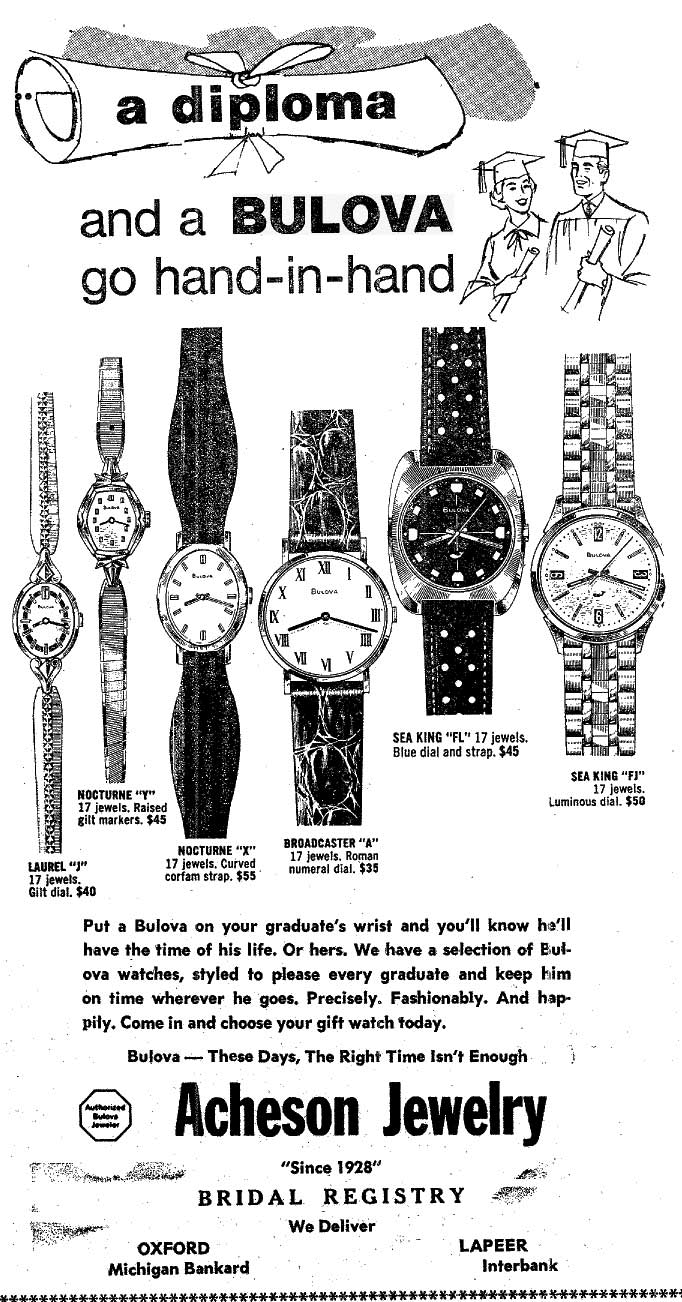 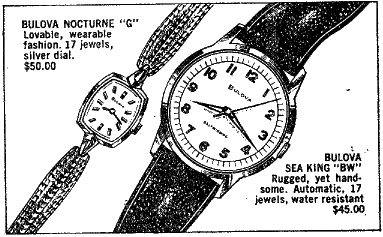 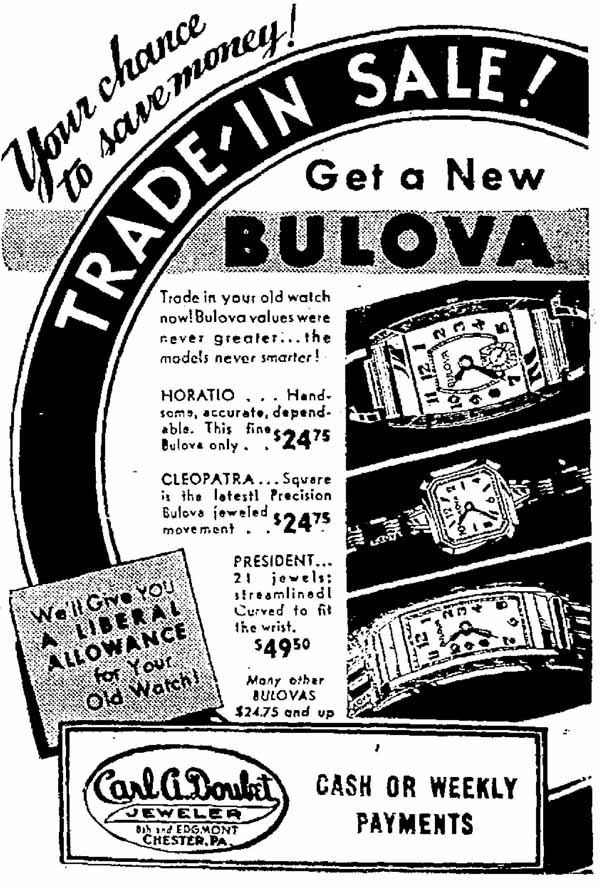 Look at that, Black Beauty, not the Air Queen.

A 1929 ad with no model names.....but what are those corner designs we see in the bottom watch?

and several like this one- December 1928 Brockport New York - not the best resolution, but nice info....The full ad is three times the resolution of this Web version below. 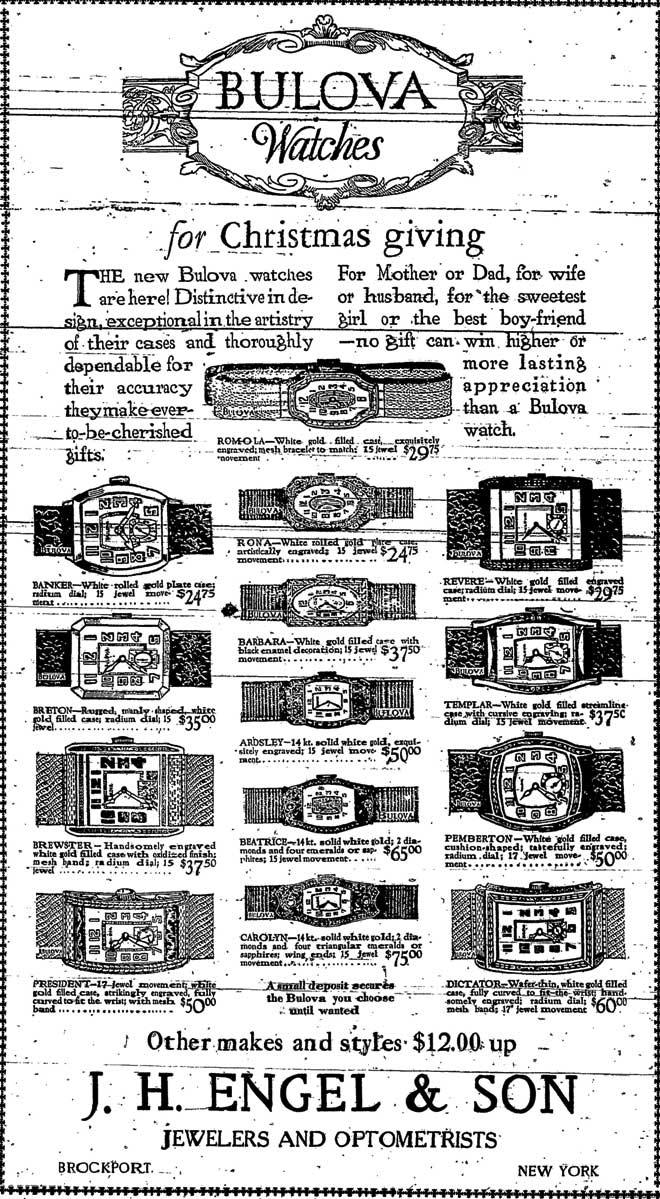 Holy moly.. .that two toned unknown from the early 30's we've been looking for????

Then it looks like it transferred to the top left watch in 34-35?

Someone's not going to get too much sleep tonight!

score on another President Madison ad with good clean detail!

Lovely! Shame it's all a bit monochromatic, but I might download the pics and crayon them in!

I've found a few ads like this full page newspaper ad from the June 1938 Wilkes-Barre Independent (New York).  Too much "info" to see at the "comments" resolution, but the full version is the size of a full newspaper page, and much better quality. 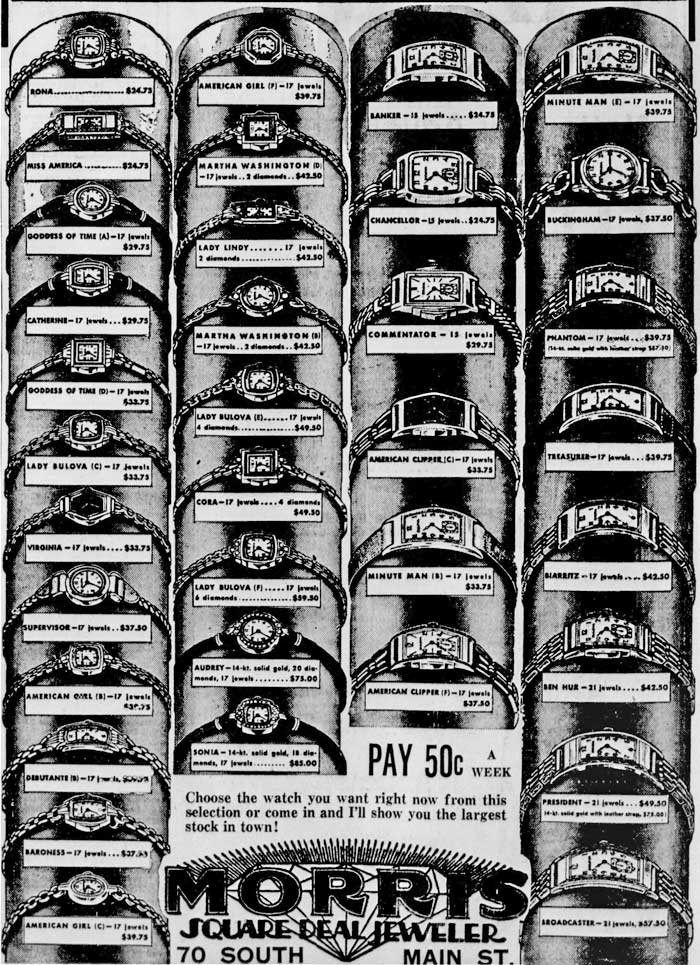 From the Sycamore True Republican 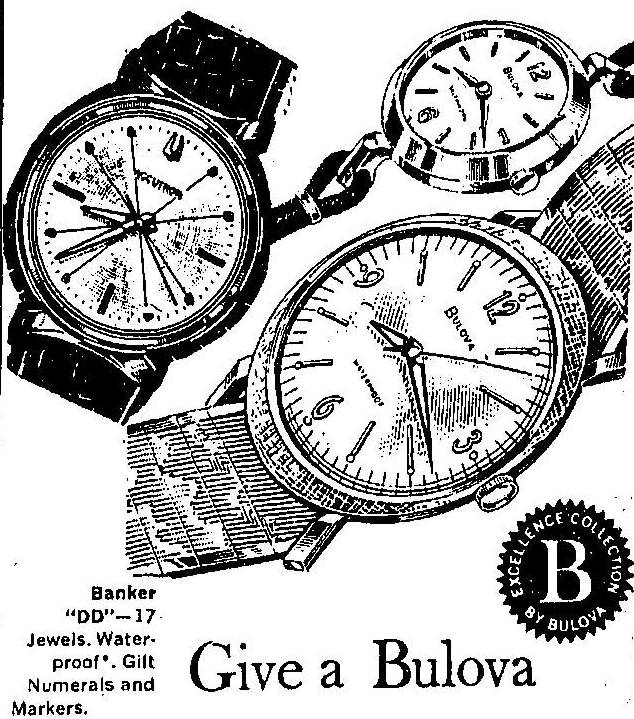 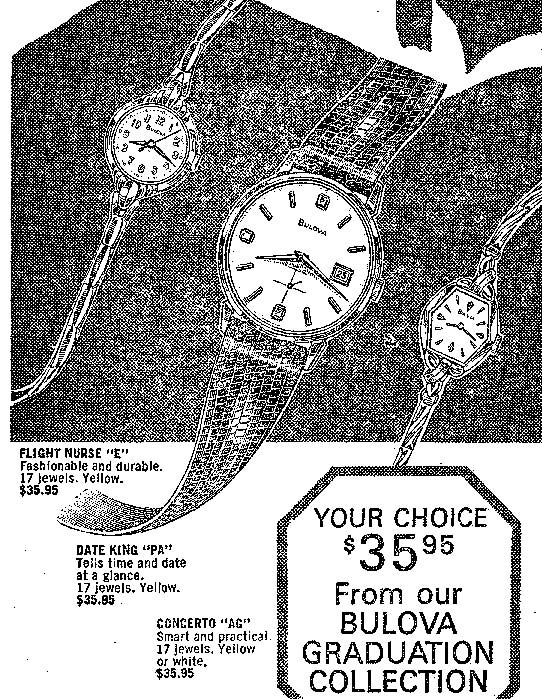 Found a real goldmine in Texas!

From left to right

I was hoping the "X" was not a "K", nice to see what the "Y" looks like...I hope ther are more out there with different letters!

Bobbee's October 1924 ad snippet.  He found several similar to this.  This is NOT the higher resolution version.  Made it small enough to fit in this post. 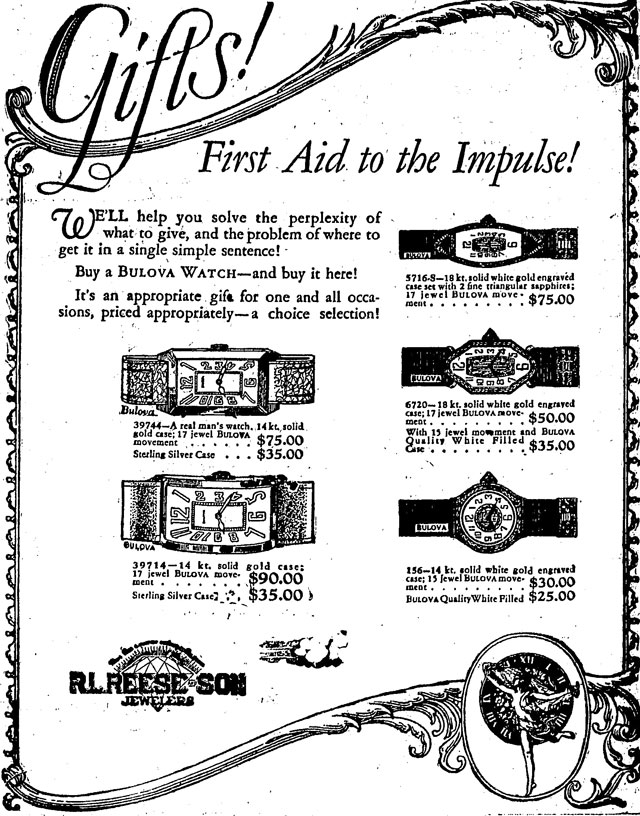 What are we gonna do with 200 plus new ads.....LOL  Eventually get rid of duplicates or take the ones with the best info/resolution.  What a fantastic "problem" to have!

Look at all the sweeties, Ma!

Just sent a 1924 ad to Will, six watches on the ad, four are new, one of which is a new name and two are new variants. All women's models. 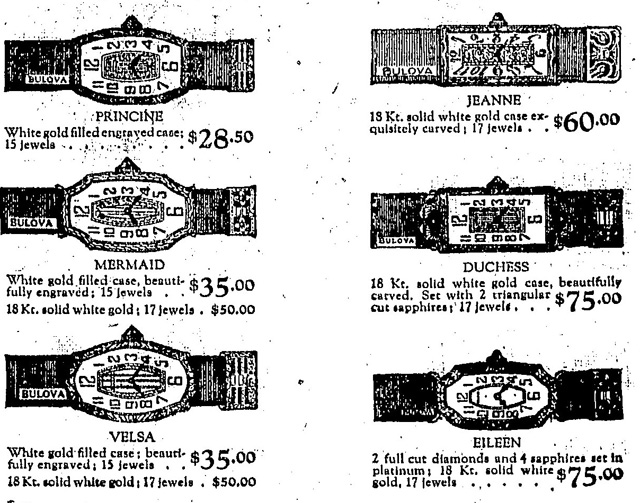