Hello  - I just came across this forum on Bulova watches and hope someone can help me solve a mystery,

I found this entry on Wikipedia regarding watches worn by astronauts on the moon:
In 1971, Apollo 15 commander David Scott's issued Speedmaster lost its Plexiglas crystal during EVA-2. For EVA-3, the final lunar surface EVA, In a 2011 interview, Colonel Scott stated that he wore a Bulova Chronograph watch, model number 88510/01, NASA Part Number SEB12100030-202 that he had agreed to evaluate for the company. Because of the commercial interests involved and the revelation of the Apollo 15 postage stamp incident, NASA withheld Bulova's name for years afterward. Therefore, while the Speedmaster was the first watch worn on the moon, it is not the only one, as Omega often claims on its watches and in marketing materials.
My question is, which Bulova watch would have been identified as "88510/01" ???   Since it is comparable to an Omega Speedmaster, I presume this is a manual wind Valjoux chronograph which Bulova made around 1970. Does that model number match anything anyone is aware of ??
Thank you
-Robert

The watch is going up for auction this month.

I'd like to think that we played a small part in the history of this watch.

Here is the original patent submission for the Bulova Moon Chronograph dated July 27 1971, courtesy of Ken Anderson (AndersoK) who notes that the submission is one day after the Apollo 15 mission launched.....coincidence.....I think not. 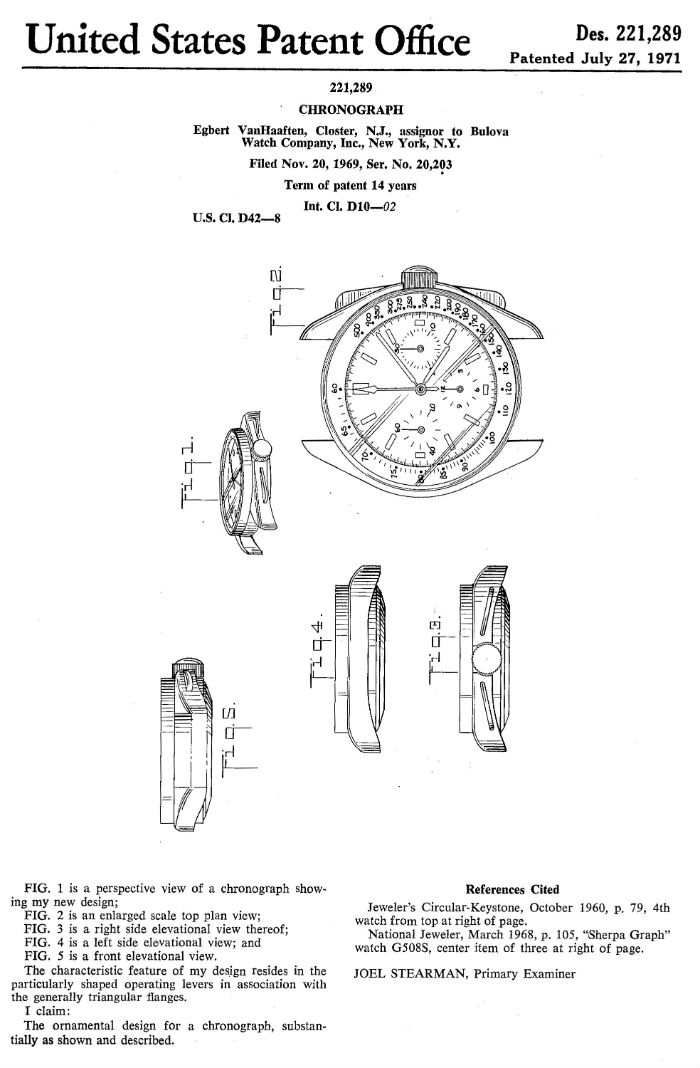 This article captured my attention but I have one nagging question, what time zone is the moon in? :)

Zulu is the correct answer, because the joke answer I had is too political to post.

Not sure about a stopwatch, but the Bulova wristwatch thast went to the moon was a Universal Geneve.

Edit - sorry, nevermind, I'm a half-wit sometimes. I apparently didn't know how to use the link insert box.

Mybulova.com is mentioned in the comments.

Here she is. The one on the left. These were produced at the time, by the way.... I'd still say that's obviously a protptype, with no name on the dial. UG did not make that movt at any rate, it is a Val 72, possibly modded slightly or not at all. The Auction makes note of the UG brand, which would have only been stamped on the movt itself. Clearly it was quick and convenient for Bulova to use their new aquisition to facilitate  the production of the watch to get a fresh crack at being in space.

At any rate, that is some rare and excellent evidence, and Sprocketmaster has done some first rate research. I love it when the pieces fall into place!

No surprise, this is a much larger watch and needless to say there is no way to 'drop' such a beautiful movt into it.......

Just for those who may not know, the venerable Valjoux 72 has been used in many good quality watches, not the least of which is the Rolex Daytona at one point.

Yeah, we need the 43mm mechanical case. 43mm, coincidentally, is the measurement of that UG and Commander Scott's ''Bulova.''

And, yeah, no signed dial on that UG up there, but the buckle is signed with Universal Geneve's logo, though. So, there's that.

Of course, who knows. The people who would know anything about it are likely long gone from this old world.

Good try on the Val 72, Reverend. It was worth a shot.